The latest swings in stock prices can be traced not just to the coronavirus, but to the escalation of trade talks, expanded borrowing by shaky companies and post-crisis changes in market structure

The last few weeks have been remarkable. The S&P500 staged a significant correction in late February the likes of which have not been observed since August 2011.

While any unexpected jolt to the stock market tests investors’ nerves, the latest one was notable for its sheer strength and speed. Even an emergency rate cut by the Federal Reserve struggled to alleviate the market’s concern on the day it was announced, with many waiting to tiptoe back in.

Then there were the inevitable questions about whether the market can handle another activity shock of such magnitude and the Fed’s ammunition to fight the fear of contagion.

Since the beginning of the year, we have been more concerned about a volatility shock than many in the market for two reasons. Firstly, based on our January interactions with market participants, an overwhelming number of investors sounded exceptionally optimistic, and were positioned accordingly. 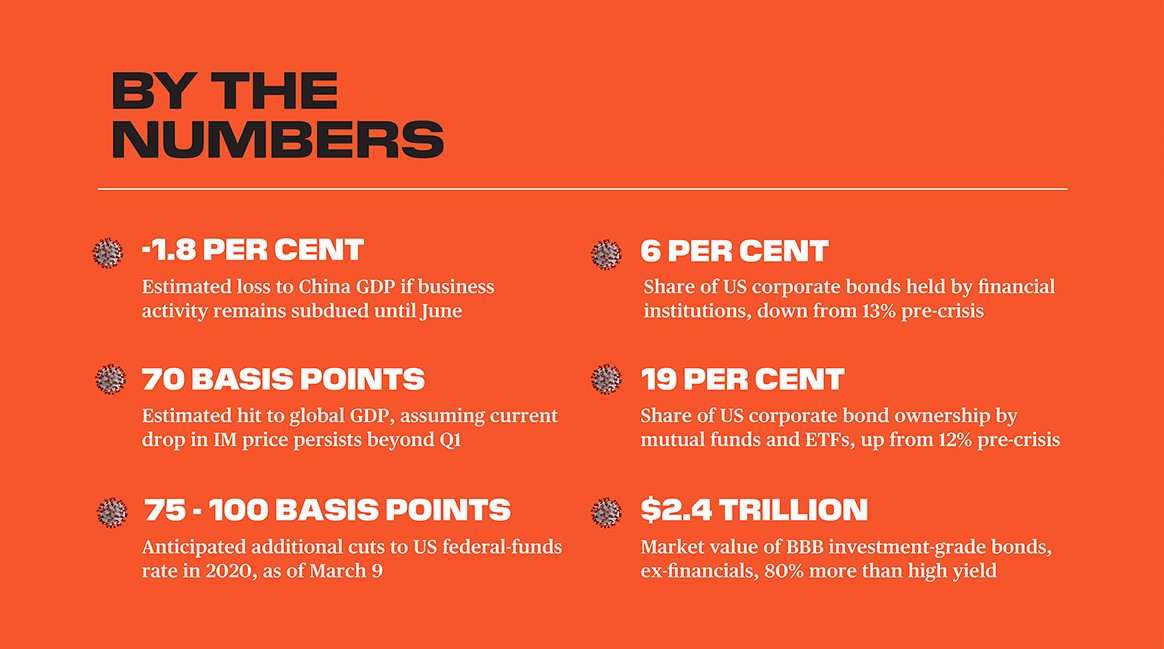 Specifically, investors were buying local currencies—Asia was particularly in demand—while selling non-US dollar G10 currencies, such as the New Zealand, Canadian and Australian dollar. Asia equity markets were also in favor, with China equities showing the most meaningful inflows.

Secondly, the macroeconomic backdrop was not particularly constructive, even before the coronavirus spread. Protectionist measures by governments may further impact supply chains, causing inflation bottlenecks across the globe.

At the same time, US presidential election rhetoric has been building. Bernie Sanders’s potential to grab the Democratic nomination could remain a key driver for market behavior this year. Another driver could be the lasting impact of the US tariffs imposed in 2018 on soybean imports and the ensuing increase in pork prices from China (see chart 1). 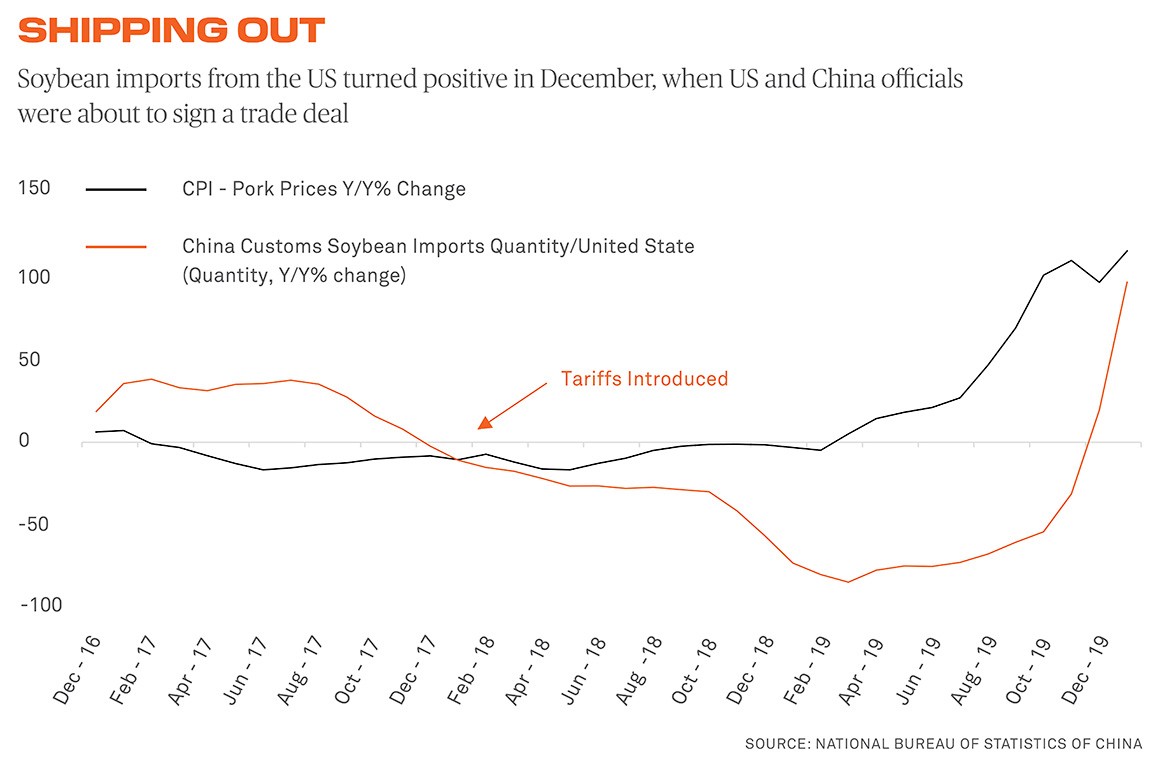 The ripple effects from the coronavirus, both in supply chains and on the demand side as more people stay home, are now front and center. The US Council on Foreign Relations pointed to the many unknowns from the coronavirus in a January report, saying, “The outbreak is far from over and there is still much left to be understood.” The report also highlighted a potential connection between viruses and whether food price spikes, such as in pork, have contributed to the issue.

An important temporary reprieve followed this report, when the Fed added coronavirus news to its outlook at the central bank’s January policy meeting, before cutting its benchmark interest rate by 0.5 percentage point in early March.

Now markets are pricing in additional easing for the remainder of the year, which should provide some further cushioning until there is more clarity over the virus.

Still, the virus, known by its shorthand covid-19, is already anticipated to have a severe impact on growth and productivity. We have estimated the impact of the virus to China’s GDP using a three-step process. First, we singled out the 10 most populous regions, which account for 57% of China's population, 60% of China’s GDP and 72% of total coronavirus cases worldwide.

Next, we calculated the expected hit to GDP in each of those Chinese provinces, assuming the immediate impact would be constrained to one quarter’s growth. Then we weighed quarterly GDP losses by the number of total cases in a given province, in relation to the total cases confirmed across all provinces studied. Hubei, for example, would suffer a $104bn loss in a given quarter based on our estimates, while Guangdong would be the second-most impacted with a $15bn loss.

Thirdly, we aggregated all provinces’ estimated GDP losses and found them to total $159bn, equivalent to a 1.2% drop in China GDP.

Assuming the subdued business activity persists until June, this would imply a 1.8% loss in China GDP. We therefore estimate a loss to the tune of RMB1.6tr, or an equivalent $234bn, and believe the fiscal stimulus package reported to be in the works to be an eventual RMB1.1-1.3tr once announced.

Next, we estimated potential global activity drawdowns with the help of metal prices. Industrial metal (IM) prices are a reasonably good indicator of global activity and we have found a strong relationship between quarterly global GDP (year-over-year growth) and IM prices.

The current local peak in metal prices was observed in Q1 2018, when both the US and China added tariffs on each other’s exports. Global GDP growth declined from 4.8% in 2017 to 2% at the end of 2019. Industrial metal prices declined 17% over the same period.

We also ran a simple ordinary regression across the past 20 years of IM price changes against GDP growth. Assuming the 8.7% drop in IM prices persisted beyond the first quarter of 2020, that implies an additional drawdown of GDP growth from 3% to 2.3%, or a 70bp hit to global GDP growth.

In US dollar terms this would correspond to a $581bn loss—amid a backdrop of already soft global growth seen at the end of 2019, given the slow progress in trade negotiations between the US and China as well as the impact of Brexit.

At the start of the year, market expectations for 2020 were hovering around a recovery in global growth from 2.9% toward 3.3%.

“A lot now hinges on central bank action. The early-March rate cut was necessary but not sufficient to help heal the economy from a sudden shock.”

The next concern for markets following the coronavirus news flow will be its impact on the capacity of financial-market intermediaries. A meaningful activity slowdown could expose weak links in market structure, potentially resulting in contractual breaches.

For now, the market is still pricing in a reasonably benign outcome from the virus. We can discern this because the spread between five- and 10-year investment-grade (IG) credit is just over 70bp. Investors genuinely worried about imminent defaults might be demanding at least twice today’s premium in the five-year bucket, judging by credit-default swap markets.

Across all sectors, we find that investors have been behaving as if a cyclical downturn is now more likely. The main sign of collateral damage so far is in the energy and cyclical consumer sectors, where spreads have been widening 5-10bp more than investment grade, which has been at 30bp since mid February.

One acute risk is the potential effect on corporate bond activity as a result of sudden halts in cash flows. In chart 2, we show changes in US corporate bond holdings since 2007, the year before the last global financial crisis. As the chart shows, the share of corporate bond ownership by financial institutions has dropped to 6% from 13% from 2007 to 2018, while the share held by broker-dealers has fallen to zero from 4%. Meanwhile, mutual funds and exchange-traded funds (ETFs) saw their share rise to 19% from 12% over the period.

“The next concern for markets following the coronavirus news flow will be its impact on the capacity of financial-market intermediaries.”

This clearly corresponds to a meaningful portion of overall corporate bond holdings being offloaded by market-maker intermediaries, relative to what they held in their inventories before the 2008 crisis. Other important market participants that have emerged since the crisis include insurance firms —whose share grew to 25% from 21%, and pension funds whose share rose to 6% from 4%.

This new micro market-structure has yet to be tested. Mutual funds and ETFs provide a sort of liquidity illusion, because they may not be able to offer as attractive prices as broker-dealers in a strained market on account of their strict, well-defined mandates. Consequently, their ability to cushion a sell-off may be limited. 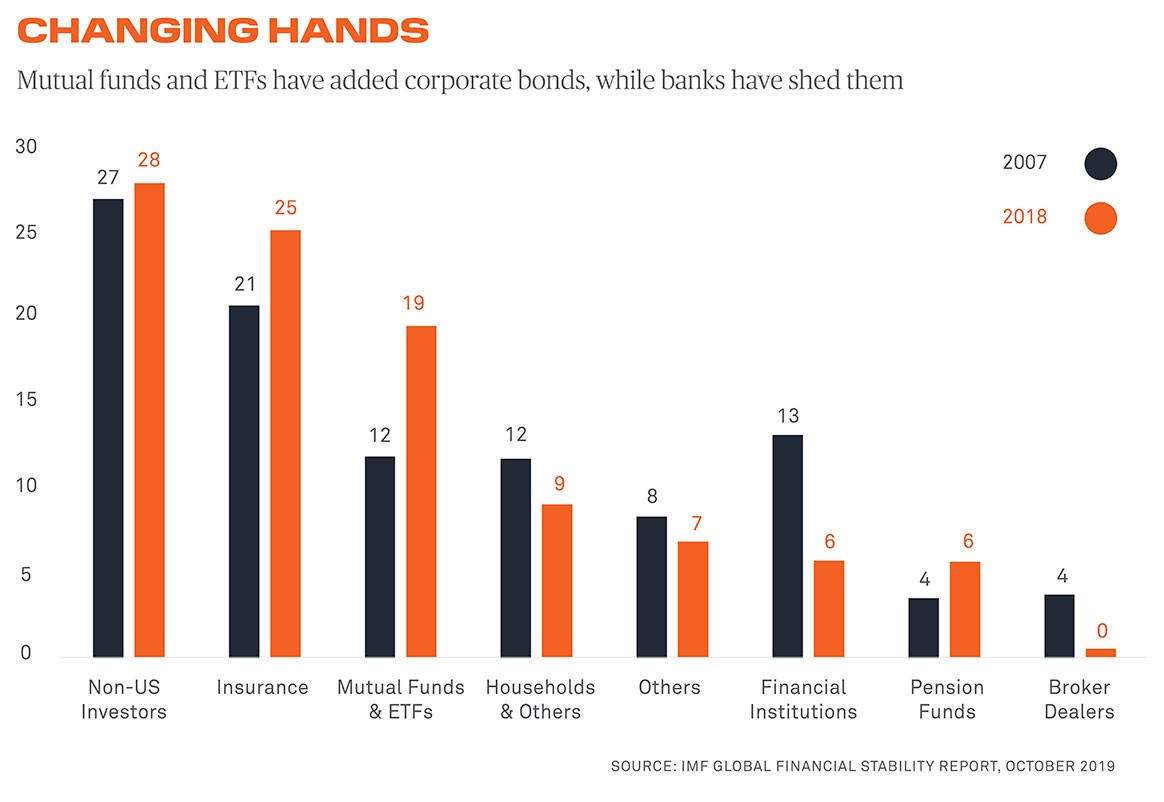 A lot now hinges on central bank action. The early-March rate cut was necessary but not sufficient to help heal the economy from a sudden shock.

We believe the endgame of this downturn might be regulatory and supervisory easing. This may allow for monetary stimulus—already injected in meaningful doses since last summer —to permeate more deeply and with more velocity into the credit markets. In other words, an old-school resuscitation of money multipliers: the amount of money aggregates that banks tend to generate with their dollar reserves.

In short, the Fed has a delicate balancing act to maintain. A 75-100bp cut may not help much if companies are on the brink of default. If markets lean against the rate cuts that are priced in and if the Fed doesn’t deliver on those cuts, it could trigger US dollar appreciation from higher rates.

Many corporates were likely running negative cash flows before the correction in the hope that a US-China Phase I trade agreement would reignite supply-chain activity. In fact, the IMF showed in its latest Global Financial Stability Report that over the past 10 years, debt at risk has remained elevated in the UK, risen in China and substantially increased among US small- and medium-sized enterprises (SMEs) —all likely in the hopes of an eventual recovery in global trade dynamics.

Corporate debt issuance evaporated in the last week of February, but this is a month when they typically make strategic funding decisions for the year ahead. Investment-grade (IG) issuance reached $88bn in the US and €73bn in Europe during the first three weeks of February, but new issuance was frozen between Feb. 24 and Feb. 28 in the US, and only €4bn was raised in Europe.

This contraction in credit markets could be particularly concerning in the US. While large firms in the US seem to be quite well shielded, SMEs could be quite vulnerable in the event a sudden economic slump. Also worth noting: these SMEs are often suppliers to larger firms, so there may be a knock-on effect.

“Many portfolio managers are worried about the market’s exposure to BBB credit at the bottom of the investment-grade credit spectrum.”

According to estimates made by the IMF in its October 2019 Global Financial Stability Report, SMEs in the US are already in the worst shape of all entities surveyed, with more than 60% of corporate debt running earnings before interest payments and taxes (EBIT) below interest payments (or <1).

It might help if portfolio managers were allowed more discretion on their credit allocation. Many portfolio managers are worried about the market’s exposure to BBB credit at the bottom of the investment-grade credit spectrum. This carries with it liquidity risk in the event those names are downgraded into speculative grade territory, becoming “fallen angels.”

Fallen angels would drain liquidity in lower quality names as well as longer duration debt. Substantial stress at the end of 2018 and in 2015 shaved $150-200bn off the market value of the speculative grade or “high yield” debt market, reducing it to $1.13tr by February 2016. 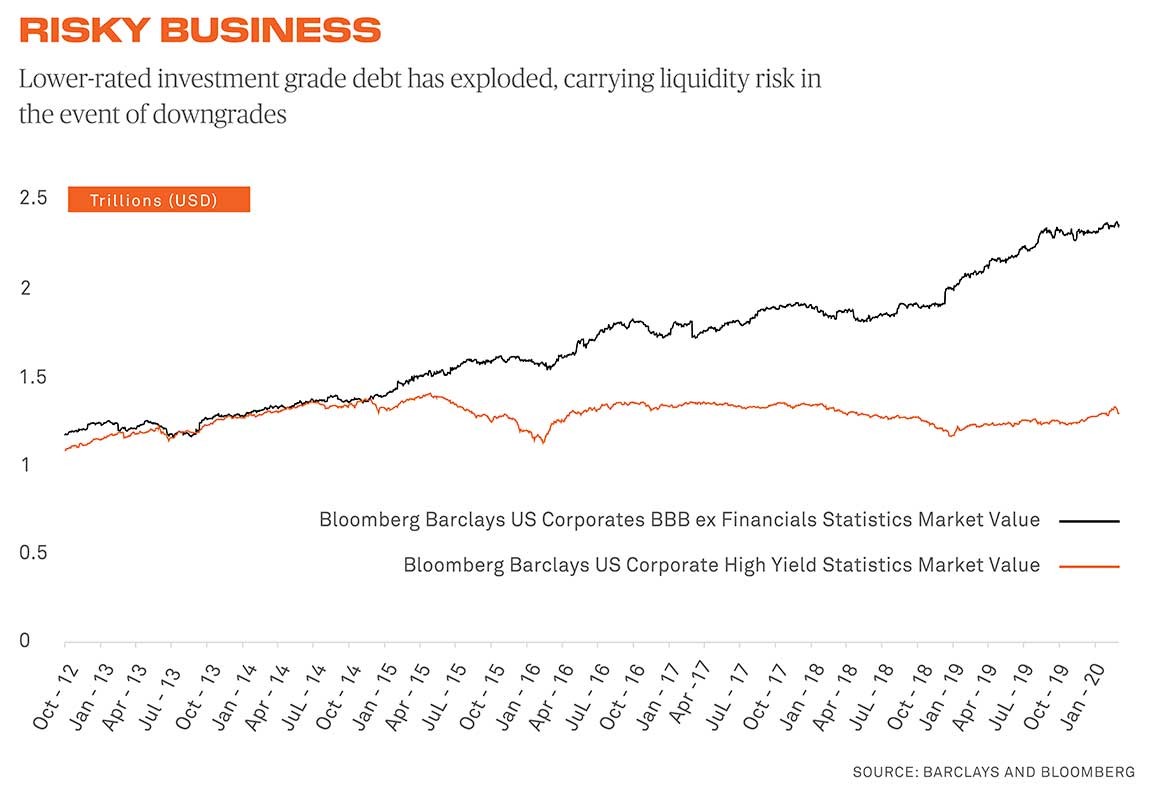 Whether investor jitters are brief or enduring, the violent swings in major equity and credit markets exposed market structure fragilities that amounted to a late-cycle scare about contagion.

Following 125bp in cuts since last summer, even the Fed is now left with little firepower. The market is already priced for Fed Funds to bottom around 25bp. Its early March rate cut failed to assuage investors because it was merely a front-loading of stimulus that was already priced in for later this year.

When emergency rate cuts fail to awe, and in the absence of immediate fiscal stimulus, special attention should be paid to liquidity dynamics. A sustained pullback, and inability of vulnerable companies to service their debts, has worrying implications for a global economy long buoyed by low rates, the hunt for yield and little to no fear of imminent recession. Minding the gaps is key. 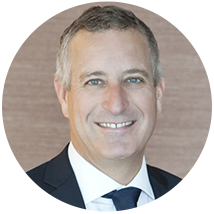 Write to Daniel Tenengauzer or reach out to your usual relationship manager.