The Shape of Economic Recovery to Come 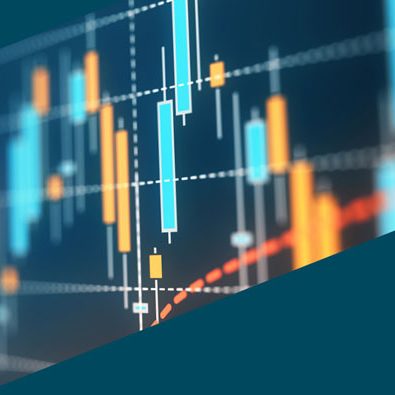 The Shape of Economic Recovery to Come

Commenting during the throes of the Global Economic Crisis in 2008, the University of Chicago economist and Nobel Laureate Robert Lucas quipped that “everyone is a Keynesian in a foxhole.”

Our view of the economy might be more nuanced. The question as to whether government intervention (especially in the form of pumping cash into a slumping economy) is essential to influencing consumer demand tends to become a mandate during a crisis.

Let’s remember that what’s now known as Keynesian economics was borne of John Maynard Keynes’ reaction to the Great Depression; until then, prominent economists generally accepted the notion that markets would self-correct and restore balance without, for instance, central banks increasing supplies of money. Keynes argued that a shot of cash in the arm was what was needed to get ailing economies back on track.

There’s also the scale of Keynesian intervention: The economic troubles facing the global markets during the coronavirus pandemic are far greater and all-around different from the events of 2008. Rather than a day of reckoning for sub-prime mortgages that were securitized and re-packaged and re-sold, the current economic crisis began as a health crisis and therefore touches every sector and industry around the world—not just banks.

The remark about everyone being a Keynesian was undoubtedly on the mind of Chief Economist for BNY Mellon Investment Management Shamik Dhar during today’s Perspectives podcast. Both Dhar and BNY Mellon’s Head of Markets Strategy, Danny Tenengauzer, joined Chief Marketing Officer Brenda Tsai for a discussion on how best to look beyond the pandemic and what investors can do to scope out new opportunities that the current upheaval will present when the economy begins to recover.

In “The Shape of Economic Recovery to Come” podcast, available today, Dhar and Tenengauzer laid out several long-term scenarios that investors may wish to consider when preparing their own businesses or portfolios for markets that might be running out of steam. But are the markets set to rebound? How and when are the two major questions they tackle.

Far from being overly bearish, the company’s economists pointed to various signs that indicate that with the right amount of stimulus and a tapering off of the virus, the world might have what it takes to rebound, and avoid a total economic meltdown. It won’t be easy, but volatility brings opportunity, and investors may be able to weather the storm.

What caught our eye after the podcast was a chart made by data from the St. Louis Fed that showed the United States’ total annual outlays as a percentage of Gross Domestic Product since the Great Crash of ’29. It’s the ideal chart to demonstrate just how Keynesians, federal spending, and global foxholes work. 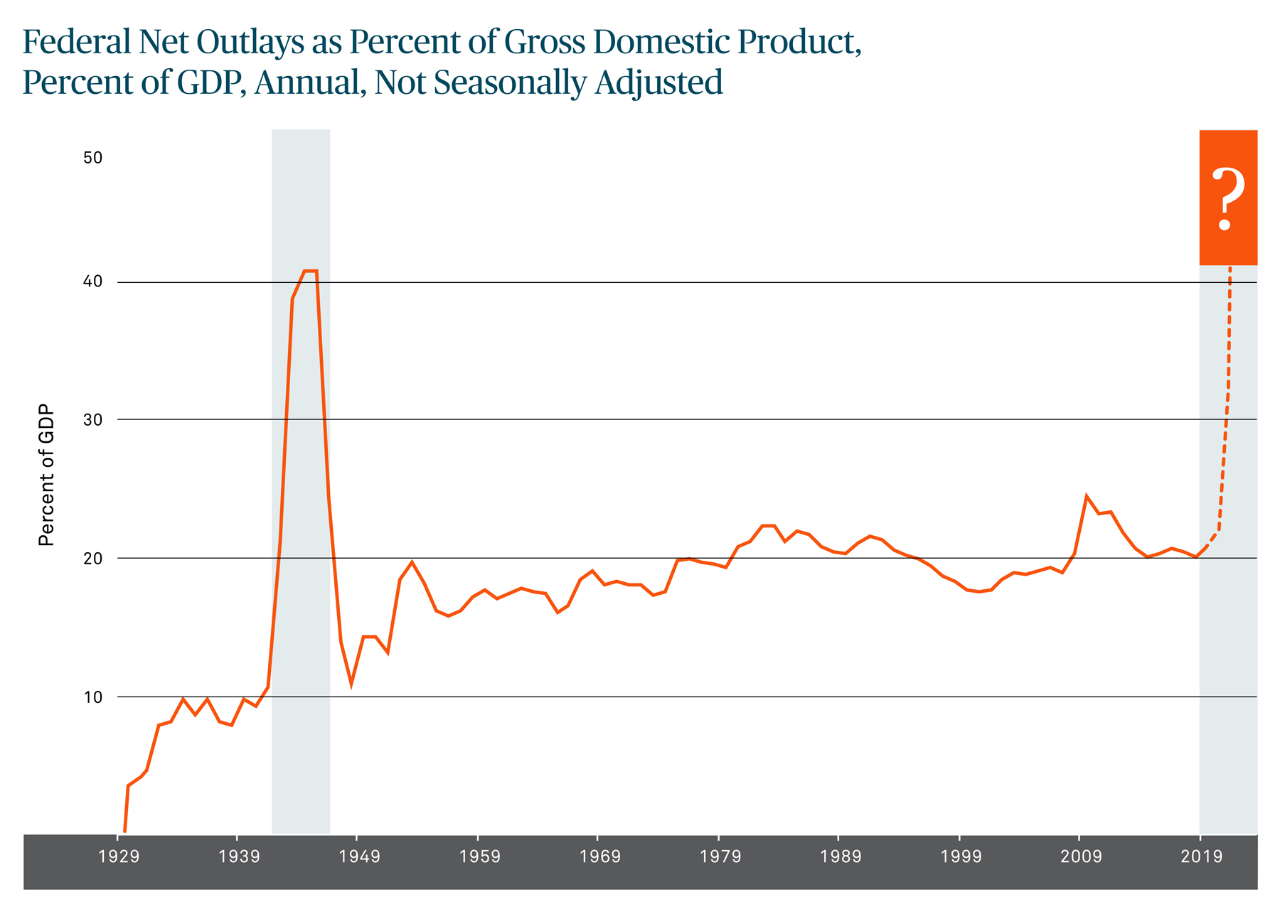 In the early 1940s, America mobilized its manufacturing sector to become the “arsenal of democracy.” That meant converting plants that once made Chryslers and Fords to churn out thousands of Sherman tanks a day. GM plants made Flying Fortresses for the U.S. Army Air Force.

And when the war was over, the country’s “all-in” production mode turned on a dime, with federal outlays returning virtually overnight to what they had been before the war. Every economic crisis that followed—markets roiled by the war in Vietnam, 9-11, and, yes, the Global Economic Crisis of 2008—pales in comparison in terms of its complete stranglehold on the national economy. Then came the coronavirus. Keep calm and carry on?

Dhar and Tenengauzer discussed how they expect textbook V-, U-, and L-shaped recoveries to manifest themselves given the two unknowns: just how much money the government will inject into the economy this year and the course of the pandemic. Afterwards, we couldn’t help plotting potential scenarios using the Federal Outlays as a percentage of GDP chart. We lengthened the timeline to 2030, sufficient time for the three recovery scenarios to play out. We also assumed that the $2.2 trillion stimulus package —about 10 percent of current GDP—could very well double by the end of this year, making the percentage of Federal Outlays eerily similar to what they were at the height of World War II.

On the chart, three dotted lines diverging at the 2019 budget year show what V, U, and L recoveries might look like. The V would be a spike not unlike 1944, with Federal spending rapidly decreasing and going back to some semblance of normal the following year. A U recovery shows a less dramatic return to pre-coronavirus spending levels. And then there’s the L (an inverted Nike swoosh, as Dhar’s colleague likes to call it) where spending would spike and then remain high over the next decade. When you hear talk about the new normal, the L-shaped recovery would be it.

Dhar is leaning in the camp of a V-shaped recovery. Tenengauzer is contemplating yet another letter entirely: W. Suppose you feel sick and don’t know if you have the flu or the coronavirus, he says. Either way, you immediately change your day-to-day behavior and await the diagnosis. After receiving the diagnosis, you alter your behavior yet again. As you recover from the illness, you rebound and eventually return to your daily routine.

Volatility in the Forecast

Investors experiencing a W-shaped recovery face a similarly volatile environment. They’ll have to test the health of the markets in which they want to invest, as well as gird themselves for lots of volatility and potentially lower Sharpe ratios across the board. But with the right amount of research and appetite for risk, investors will be in for an exciting and potentially lucrative market, according to Tenengauzer.

Although investors face an uncertain future, the “known unknown” is that it will be a volatile one. So as Keynesians begin spending to get the world out of a big foxhole, investors might look for some new opportunities—no matter the shape of the recovery.

This material is for general information purposes only and is not intended to provide legal, tax, accounting, investment, financial or other professional advice on any matter. Unless stated otherwise, this material does not constitute a recommendation or advice by BNY Mellon of any kind. Views expressed are those of the author stated and do not reflect views of other managers or the firm overall. This information contains projections or other forward-looking statements regarding future events, targets or expectations, and is only current as of the date indicated. There is no assurance that such events or expectations will be achieved, and actual results may be significantly different from that shown here. You should discuss this material with appropriate advisors in the context of your circumstances before acting in any manner on this material and make your own independent assessment (based on such advice). This material may not be comprehensive or up to date and there is no undertaking as to the accuracy, timeliness, completeness or fitness for a particular purpose of information given. BNY Mellon will not be responsible for updating any information contained within this material and opinions and information contained herein are subject to change without notice. BNY Mellon assumes no direct or consequential liability for any errors in or reliance upon this material.

This material may not be reproduced or disseminated in any form without the prior written permission of BNY Mellon.

© 2020 The Bank of New York Mellon Corporation. All rights reserved.