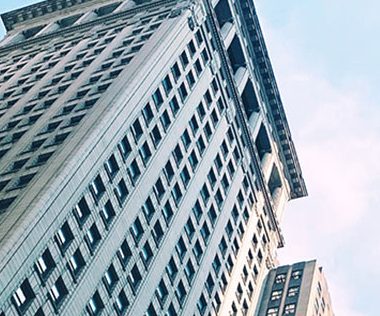 The apparent disconnect taking place between the U.S. stock market and economy continues to be the major question posed to me in recent client meetings. Up until now, it appeared that the stock market was seemingly ignoring the bleak economic headlines and making substantial gains from its late-March low. But the stock market is a forward-looking discounting mechanism, able to look past current headlines and ahead to the eventual recovery. Now, the data are also beginning to affirm that the economy is on the mend. The biggest example of that was the May jobs report, which showed a surprising decline in the unemployment rate from 14.7% to 13.3% and the addition of 2.5 million jobs.

Let’s take a closer look at what has helped to lift the markets to date, and more importantly, where markets may be headed in the months and quarters to come.

Investors should not underestimate the work that governments around the world have done to provide support for those affected by this pandemic. In fact, financial markets are monitoring the building of a fiscal bridge needed to get us to the other side of this economic recession. Markets realize that a new normal waits for us there, but are expecting the government to supply fiscal aid, through unemployment assistance, keeping jobs in place, and helping companies pay expenses.

As of this writing, the U.S. Congress has approved three pieces of relief legislation, including the $2.2 trillion CARES Act, passed on March 27. An additional stimulus package, the HEROES act, is currently going through Congress, but the surprise May employment report could reduce the sense of urgency.

The Federal Reserve has done an impressive job delivering a massive amount of support that has brought liquidity back to much of the fixed income market. Over the course of two announcements in March, the Fed lowered short-term interest rates by a combined 1.5% to near zero. Additionally, the Fed encouraged the use of its discount window, loosened bank capital requirements, and expanded the municipal lending facility and Main Street lending programs, just to name a few. It also launched a massive quantitative easing program, expanding its balance sheet by purchasing Treasury and mortgage-backed securities and for the first time in history, agreed to buy corporate bonds. Lastly, the Fed made a move to provide forward guidance once again as it communicates its future plans for short-term interest rates to the public.

Needless to say the financial markets have been impressed by the Fed’s willingness and ability to provide liquidity in these uncertain times. History teaches us that whenever the lender of last resort steps in to support markets, you are traditionally near a low, as relief (and buyers) typically come into markets once participants know that a buyer sits behind them.

The Message of the Market

Unprecedented fiscal and monetary actions have provided the liquidity and confidence needed to support and propel global equity markets. But there also seems to be more to the rally than just that. The stock market is also beginning to separate those firms that will not only survive this pandemic, but may also thrive once it is over. For example, large firms with excellent growth prospects are being rewarded, while firms that may struggle for the foreseeable future are being punished. And the overall rally has been powerful. In fact, when looked at through the lens of history, this rally bodes well for the future of the stock market and our economy.

But it’s not only the stock market that has recovered. Credit spreads are defined as the difference between the interest rate demanded on a lower quality corporate bond versus a comparable maturity U.S. Treasury bond. Credit spreads are often seen as a barometer of the health of the economy. In times of uncertainty and stress the spreads naturally widen, while in times of calm these spreads begin to tighten and can end up being relatively tight (close) to one another. The uncertainty around coronavirus caused credit spreads to widen substantially. But, beginning around the time equity markets bottomed, spreads began to tighten.

The Treasury yield curve is also beginning to steepen, with the long end of the curve rising more than the short end.  Last week alone, after the better-than-expected jobs report, the 10-year Treasury bond yield increased roughly 25 basis points to reach 0.90%. This suggests improved economic growth ahead.

Historically, a recovery in spreads and the steepening of the yield curve are excellent signals for the health of the overall economy and have provided an early indicator of the direction of equity markets as well.

Is This Just a Bear Market Rally?

That belief is becoming highly unlikely. As Exhibit 1 illustrates, this rally doesn’t look like your typical bear market rally. If we look at rallies that have taken place during bear markets going back to the 1950s, this one stands out in terms of both its duration and strength. In fact, you could argue that this rally has been so strong that it seems to have taken a retest of the lows off the table as it does not fit the pattern of prior bear market rallies that subsequently reversed. Of course, only time will tell if this rally proves to be false, but with each passing day a retest becomes less likely. 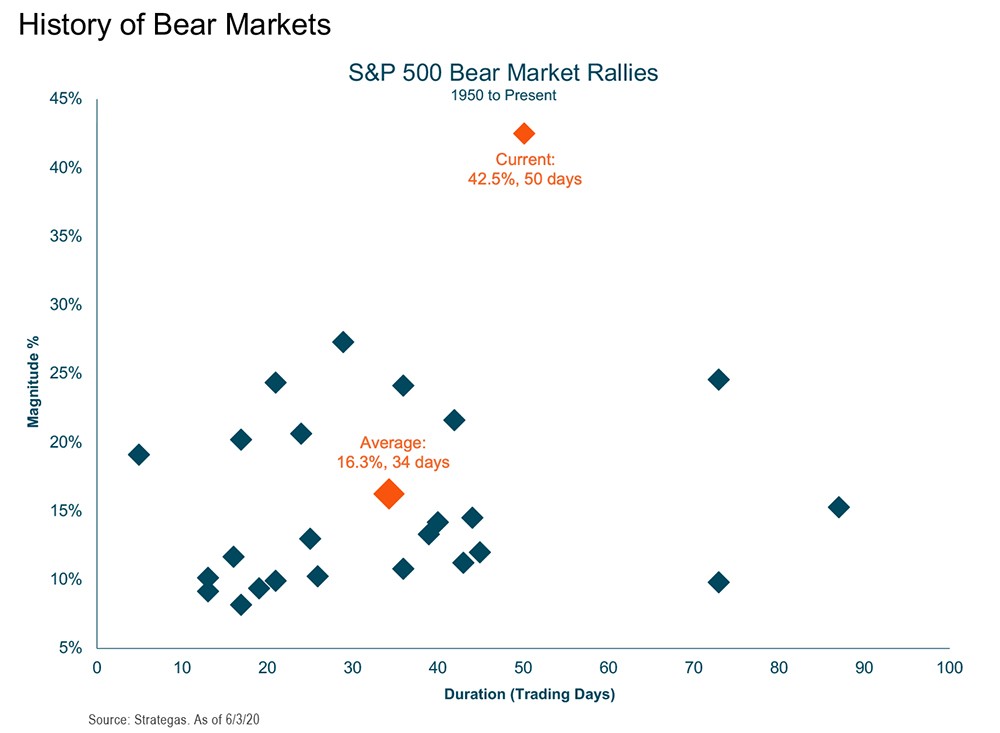 So if this isn’t likely a bear market rally, then what is it? Exhibit 2 looks at equity market gains over 50-day periods, including the rally since the March 23 bottom. It then looks at the market’s subsequent returns. These returns illustrate that equity markets are generally higher — sometimes substantially so — after six to 12 months. The interim period can prove choppy, but better times tend to lie ahead after this period of digestion. Seasonality may also come into play as markets tend to historically move sideways, or in a trading range, in the summer months. It is also interesting to note that most of these strong historical 50-day periods have appeared after significant corrections or bear markets, and show how strongly stocks tend to perform in the early stages of recovery. 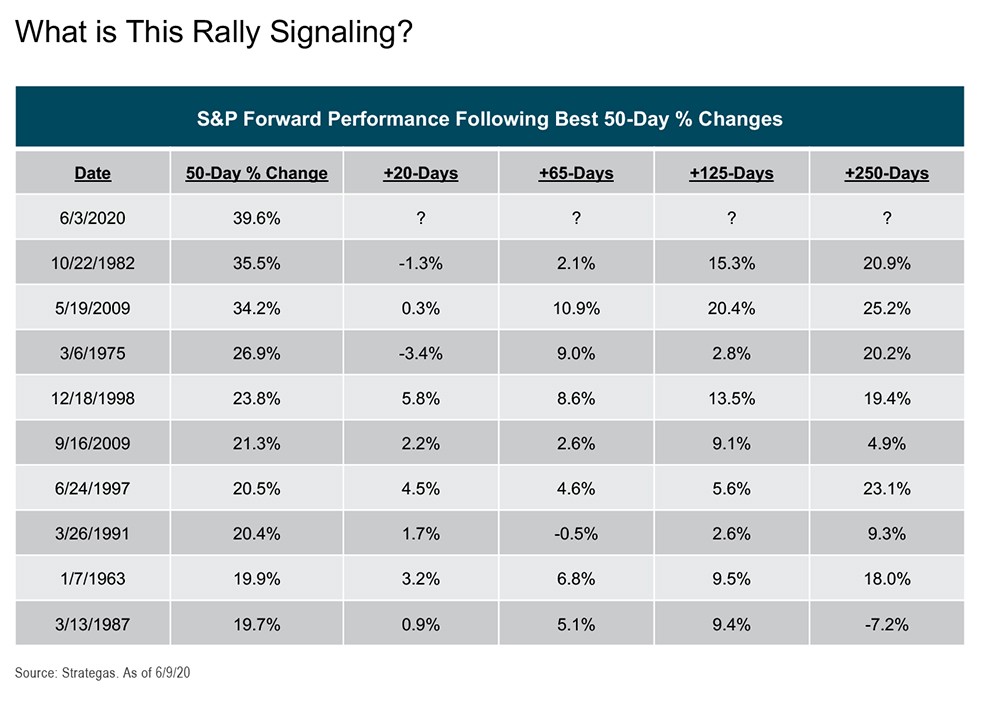 What Could Go Wrong?

The road to the new normal will be anything but smooth. But, the worst of the economic data may be behind us with a jobs recovery already underway as seen in the May jobs report. The ever-present risk of a second wave will certainly hang over markets until a much better treatment or even a vaccine is invented. And the virus has put strains on everything from US-China relations to the price of oil. To make matters even more uncertain, we are in an election year.

But we also must remember that in uncertain times in the past, new opportunities have always arisen. Science and technology, and even changes in human behavior (i.e. social distancing), have rescued us in the past, and probably will do so again.

From an investment standpoint, I will leave with the following: Historically, all other crises have proven to be eventual buying opportunities. We believe this unprecedented event will prove to be no different. Perhaps the market is also beginning to agree with this assessment. 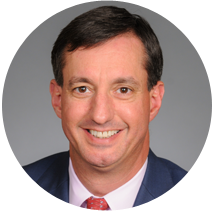