Market participants hope to speed up settlement and collateral transfers with digital tokens recorded on the blockchain.

Imagine an integrated ecosystem in financial markets, where every real-world asset is also represented by a digital unit or token. That token could be utilized and transferred more efficiently than the physical asset, introducing additional transparency, 24/7 liquidity and instantaneous settlement to the investment lifecycle.

The concept of digitalizing ownership rights, in a process known as “tokenization,” is the latest hot topic sweeping the boardrooms of brokerages, fund-management companies and banks. Some see it as having the potential to reduce operational costs and minimize the number of market venues and intermediaries needed in capital raising.

Tokenization could also reshape the investing landscape by connecting up issuers to a more diverse set of buyers and sellers, who may consider fractions of assets more attractive and affordable.

Here’s how tokenization works: the digital token references someone’s right to property or delivery of an asset. Ownership changes are recorded on an unalterable, shared digital ledger called a “blockchain,” similar to the infrastructure underlying cryptocurrencies like bitcoin and ethereum.

The potential benefits of tokenization are significant — both pre-trade, for issuers who could save money by removing layers of friction in their normal workflows; and post-trade, where the technology could be used for efficiencies in things like collateral transfers and trade reconciliation.

Distributed ledger technology (DLT) has digital signatures in it that govern the transfer of token ownership and allow peer firms to exchange value directly. These trades are recorded as distinct events on the blockchain. Then issuers, as well as other eligible participants in the transaction, can use it to see who owns what — and any movement in the chain — simultaneously, in near real time.

Tokenized assets can come in almost any form, including as security tokens referencing traditional units like stocks and bonds, or non-traditional ones like artwork or music. Central bank currencies can also be tokenized. In fact, proponents in Canada and Singapore have already tried it.

“It doesn’t change the nature of the asset; it just changes its texture and enables it to be more liquid,” says Subhankar Sinha, head of blockchain at BNY Mellon.

One of the primary use cases is in real estate. For instance, there was the tokenization of an $18 million stake in the St. Regis hotel resort in Aspen, Colo., a few years ago, although other recent deals — including a student housing deal from Convexity Properties and a venture between Fluidity and Propellr — have reportedly faltered.

Another asset class being explored by tokenization experts is commodities. A Russian billionaire reportedly wants to tokenize palladium, while the Perth Mint in Australia is looking to tokenize gold.

Structurally, there are many options for how these offerings can come to market. There are tokenized securities tied to equity or debt, for example; “utility” tokens representing services or infrastructure; tokenized money linked to fiat or crypto currency; and “stablecoins,” a kind of cryptocurrency whose values are pegged to fiat currencies like the U.S. dollar.

Security tokens are attractive because they may enable private-equity shareholders to exit their investments faster than the typical seven- to 10-year time horizon, notes Juan Hernandez, co-CEO of Openfinance Network, a secondary trading venue. One of its recent listings was a tokenized venture capital fund for Blockchain Capital. Those tokens sold in 2017 for $1 apiece and as of Feb. 17 were valued at $3.69.

“It doesn’t change the nature of the asset; it just changes its texture and enables it to be more liquid. ”

So far, the hype has not been matched with broad investor participation, in part because of the time it will take for platforms and other infrastructure to be built and adopted. Tokenized deals to date have faced a range of challenges in how they were offered, structured and distributed, says Ian Taylor, head of advisory services at Galaxy Digital, a digital-assets-focused merchant bank. “While I am confident these markets will develop, issuers are, quite wisely, being cautious until we see demonstrated engagement from investors,” he notes.

Andrew Keys, co-founder of hedge fund Digital Asset Risk Management Advisors (DARMA Capital), says it is too early for him to put money to work in security tokens, but he is bullish about their potential. He was among a group that helped the Monetary Authority of Singapore issue a token tied to Singapore dollars in an initiative called Project Ubin.

Parties to a digital ledger may be more likely to trust the origins of the assets underlying tokenized offerings if an agent has verified the information recorded about the deal and guaranteed its security.

“One cannot dismiss the presumption that there will be a benefit of increased liquidity to investors, but I don’t think at this point that can be said with any certainty,” says Nic Niedermowwe, CEO of crypto-dedicated fund management company Prime Factor Capital.

Tokenizing traditional financial assets isn’t a far-fetched concept. Indeed, digitalized securities have been around for decades. American Depositary Receipts are already an analog representation of shares in non-U.S. companies, issued elsewhere in the world but listed in U.S. markets.

Most stock certificates are also stored electronically, thanks to a process called “dematerialization,” which was extended after Hurricane Sandy in 2012 flooded a lower Manhattan vault and forced settlement giant Depository Trust & Clearing Corp. to send tons of the certificates away to be freeze dried.

Today, tokenization is about marrying up traditional financial products with new blockchain technology. Most large banks are investing in some proof-of-concepts so as to be ready for what they anticipate could be a rapid evolution in age-old settlement procedures.

For its part, BNY Mellon is eager to digitize its existing capabilities and leverage blockchain technology to improve its interactions with clients.

As one of the world’s largest custodian overseeing $37.1 trillion as of Dec. 31, 2019, the bank has a series of tokenization development projects under way to learn about different use cases, any risks to its adoption and what marketplace frictions it can remove for clients. For example, the bank is working to issue bonds and syndicated loans on a digital ledger.

Another such project is the bank’s participation as one of 15 shareholders in the Fnality Global Payments initiative, formerly called Utility Settlement Coin, a digital payments system designed to leverage the tokenization of cash. The idea is for banks in the network to deposit cash with the central banks governing any one of five currencies (CAD, EUR, GBP, JPY, USD) and then exchange digital settlement assets referencing those deposits instantaneously, without middlemen. The project is set to be extended beyond the initial 15 stakeholders in due course, according to Rhomaios Ram, CEO of Fnality.

“This is the evolution of money,” says Lucien Foster, head of digital partnerships at BNY Mellon. “We’re going from the old days of stock certificates being run across Wall Street to digital tokens that can be moved and settled with a keystroke.”

The growth in blockchain technology has also inspired a slew of related digitization projects at BNY Mellon. In 2016, the bank created a blockchain-based, parallel record of all its broker-dealer clearance and collateral management transactions. The so-called “BDS 360” project is key because the bank processes more than $10 trillion in Fed-eligible securities each day.

Blockchain technology has already been deployed in multiple areas of financial markets that are being targeted for digital disruption: from bonds issued by Daimler, Société Générale and the World Bank, to cross-border payments, trade finance and mutual funds.

BNY Mellon is partnering with a blockchain trade-finance initiative called the Marco Polo Network, founded by TradeIX and R3. And Franklin Templeton Investments in September filed a preliminary prospectus to register a new kind of blockchain-enabled money market fund, where the fund’s shares can be sold and redeemed on an app. 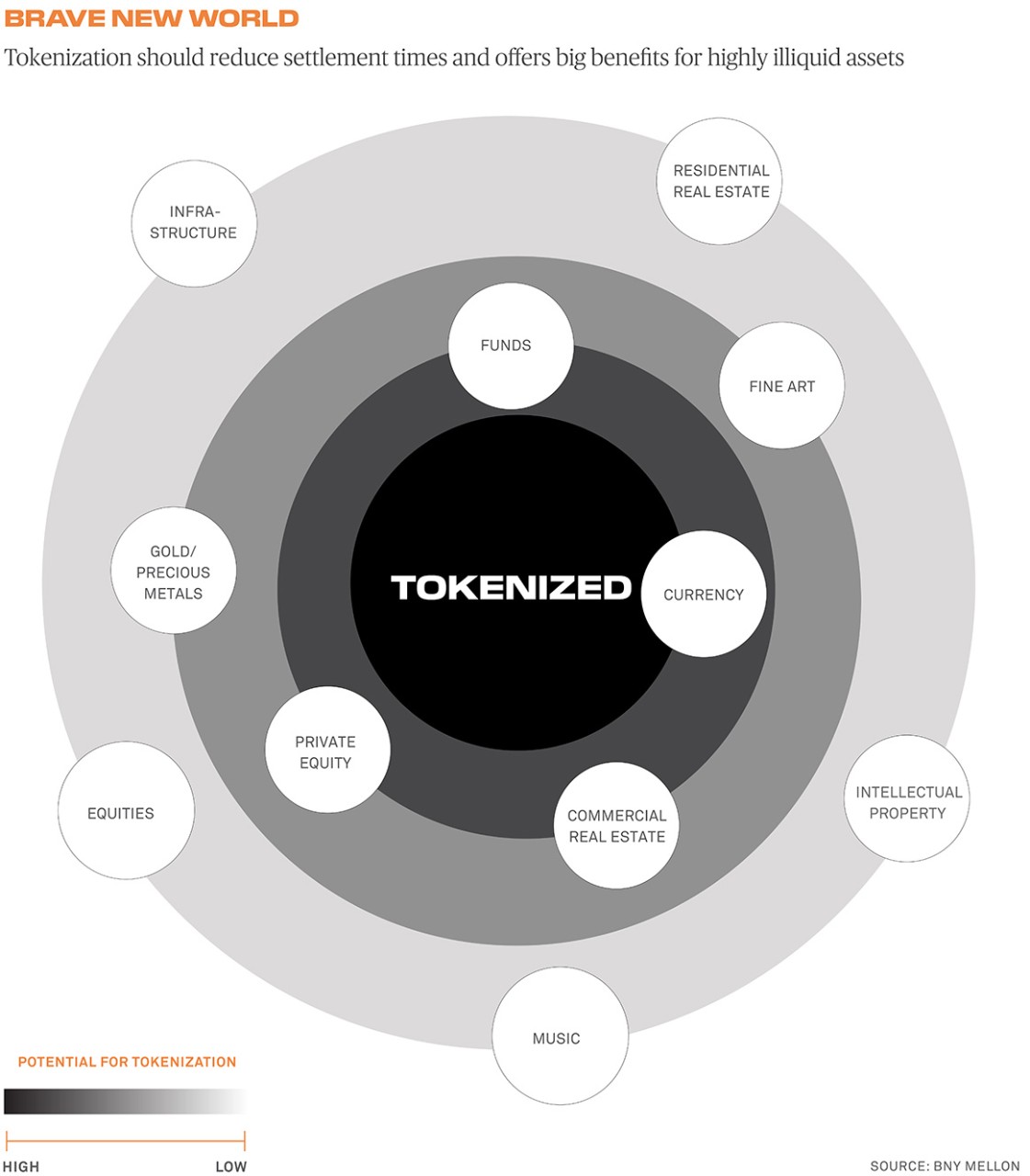 Among the most exciting projects surrounding tokenization are platforms that would allow for participants to exchange collateral instantly in tokenized form.

In October, New York fintech startup Paxos received temporary regulatory relief to launch a settlement service for the simultaneous exchange of cash versus U.S. equities on its private blockchain. The platform launched Feb. 20.

Other infrastructure providers such as HQLAx are working to allow instant ownership transfers in baskets of securities like government and corporate bonds residing at multiple custodians, using tokens. The arrangements are expected to mobilize and expand access to global pools of collateral, paving the way for near-real-time settlement in the repo and securities finance markets.

“The power of tokenization comes from allowing workflows to be standardized and automated in safer, faster, cheaper ways.”

With collateral able to move as quickly as the tokens, it could become possible to synchronize more transaction workflows and reduce settlement failures, some say. Tokenization could help because it involves instantaneous settlement and wouldn’t need both sides of a trade to perform in a given timeframe.

Such solutions would be useful, considering that European regulators have issued rules for harmonizing operating procedures between settlement providers under the Central Securities Depository Regulation (CSDR). Those rules, which came into force on Sept. 17, 2014, will force CSDs to mitigate settlement fails.

A key issue in the development of tokenization, however, is a perceived lack of clarity around regulating it. While a tokenized security is still a security, there are new technologies and risks to be considered before adoption.

The merger of the traditional finance world with new blockchain models also has significant implications for record-keeping and what it will mean for all parties to a deal to share a single record that can be both customized and updated in an instant.

Participants and regulators are increasingly able to distinguish between what are cryptocurrencies and what are traditional financial instruments on the blockchain, says Justin Schmidt, head of digital asset markets at Goldman Sachs. But regardless of the setting, the deal terms need to stand on their own.

“If a project is tokenizing just for the sake of fractionalization, that’s not innovation,” he notes. “Almost all major financial markets already support fractionalization, and the power of tokenization comes from allowing workflows to be standardized and automated in safer, faster, cheaper ways.”

Markets are rife with innovators looking to use blockchain-based solutions to upend traditional finance models. One complication giving investors pause: regulators are not moving nearly as quickly.

This is partly because regulators had previously conflated tokenization with cryptocurrencies like bitcoin. Another reason is regulators were criticized for being late to scrutinize Initial Coin Offerings (ICOs), sales of digital tokens that bypassed traditional fundraising sources.

For now, Security Token Offerings (STOs) are sold mostly as private placements, meeting the Securities and Exchange Commission’s Regulation D or Regulation S or even Regulation A+ exemptions.

But some tokenized deals do not come in the form of securities that are deemed “investment contracts” under the SEC’s Howey test. Where they are not securities, they could be overseen by another regulator.

In April last year, the SEC issued a statement on its framework for digital assets. In the framework the regulator said even on some deals where registration was not required, activities involving “digital assets” could still be subject to SEC oversight. The UK’s Financial Conduct Authority issued its own policy statement last July, saying security tokens are within its so-called regulatory perimeter.

While regulators are refining their approach to overseeing digital assets, investors will need to be careful to ensure the proper protections are there.

As far as commodities futures, “We don’t have a good regulatory framework for digital assets generally,” notes Timothy Massad, former head of the Commodity Futures Trading Commission and a senior fellow at Harvard’s Kennedy School for public policy. “There are gaps under existing laws, such as for cryptocurrencies, and where the laws do apply, we don’t have clarity on exactly how traditional standards apply to this new world.”

Write to Subhankar Sinha in the Digital Team, Mark John in Clearance & Collateral Management, or reach out to your usual BNY Mellon relationship manager.