How to Succeed in Fixing Settlement Fails

How to Succeed in Fixing Settlement Fails

When failures-to-deliver in U.S. Treasury and agency securities spiked during the COVID-19 market volatility in March, it threw a spotlight on the need for settlement efficiency. Recent advances in machine learning have created an opportunity to help address these fails and promote market liquidity. Listen to the audio version of How to Succeed in Fixing Settlement Fails  or download the full article below.

Capital markets have long suffered from a nagging problem: every day, roughly 2% of all U.S. Treasuries and mortgage-backed securities set to change hands between buyers and sellers do not end up with their new owners by the time they are supposed to arrive.

The issue is more than merely annoying, like a takeout order going wrong. An unexpected delivery failure can trigger tens of millions of dollars each day in penalty fees.

Fails can also cause reputational harm if brokers, who had plans for securities to enter their inventories, never receive them. To cover client activities, brokers can borrow cash or high-quality securities as replacements but doing so can become expensive late in the day. 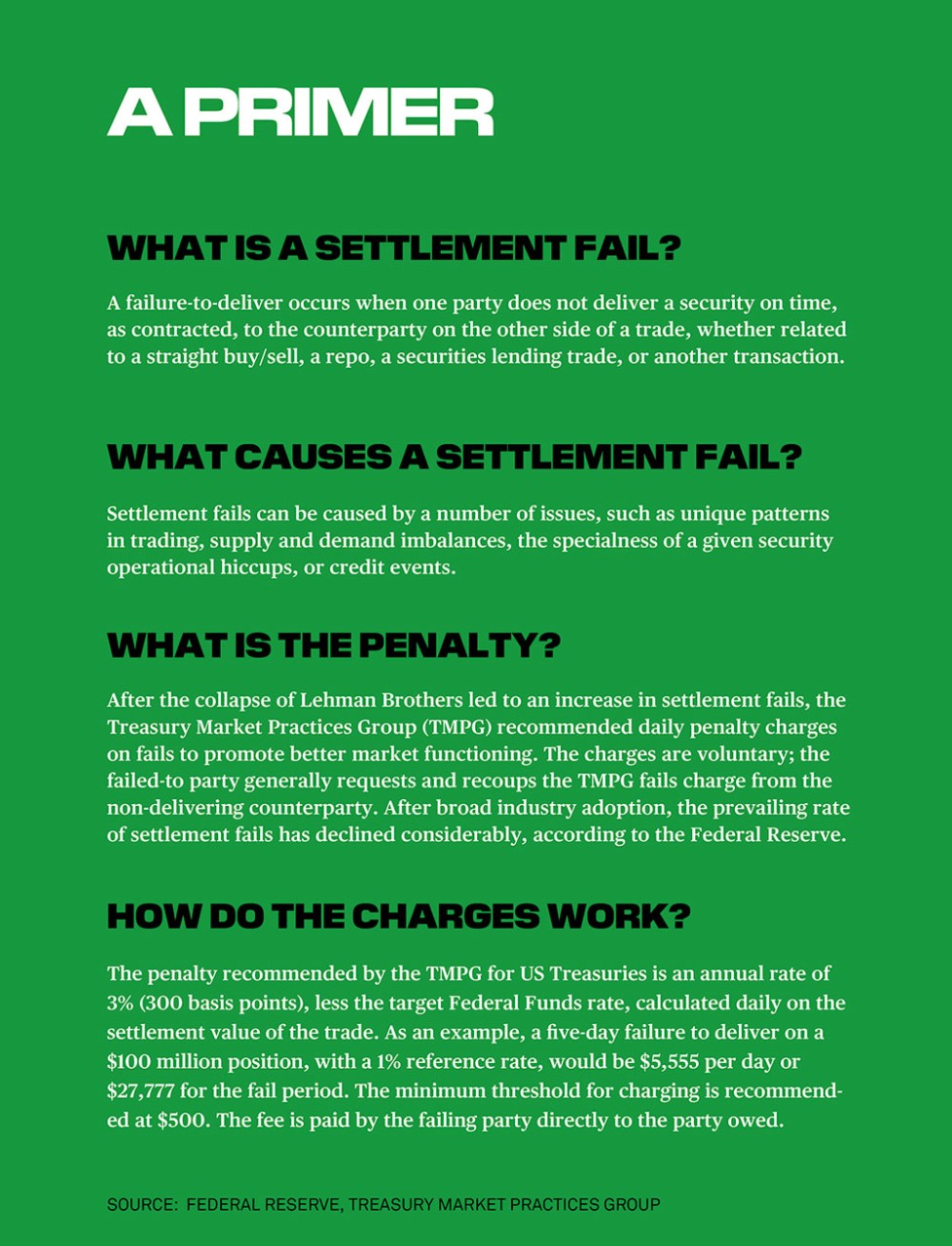 While the problem goes back decades, it became more and more evident when financial firms began adapting to an increasing number of post-crisis regulations, many of them requiring institutions to set aside capital against risks such as defaults and settlement failures.

Heightened market volatility during March and April from COVID-19, when traders switched to working remotely, made the issue even more pressing because it became harder for many firms to make sure everything was running smoothly. The larger volume of securities settlements in that period contributed to a higher number of fails. 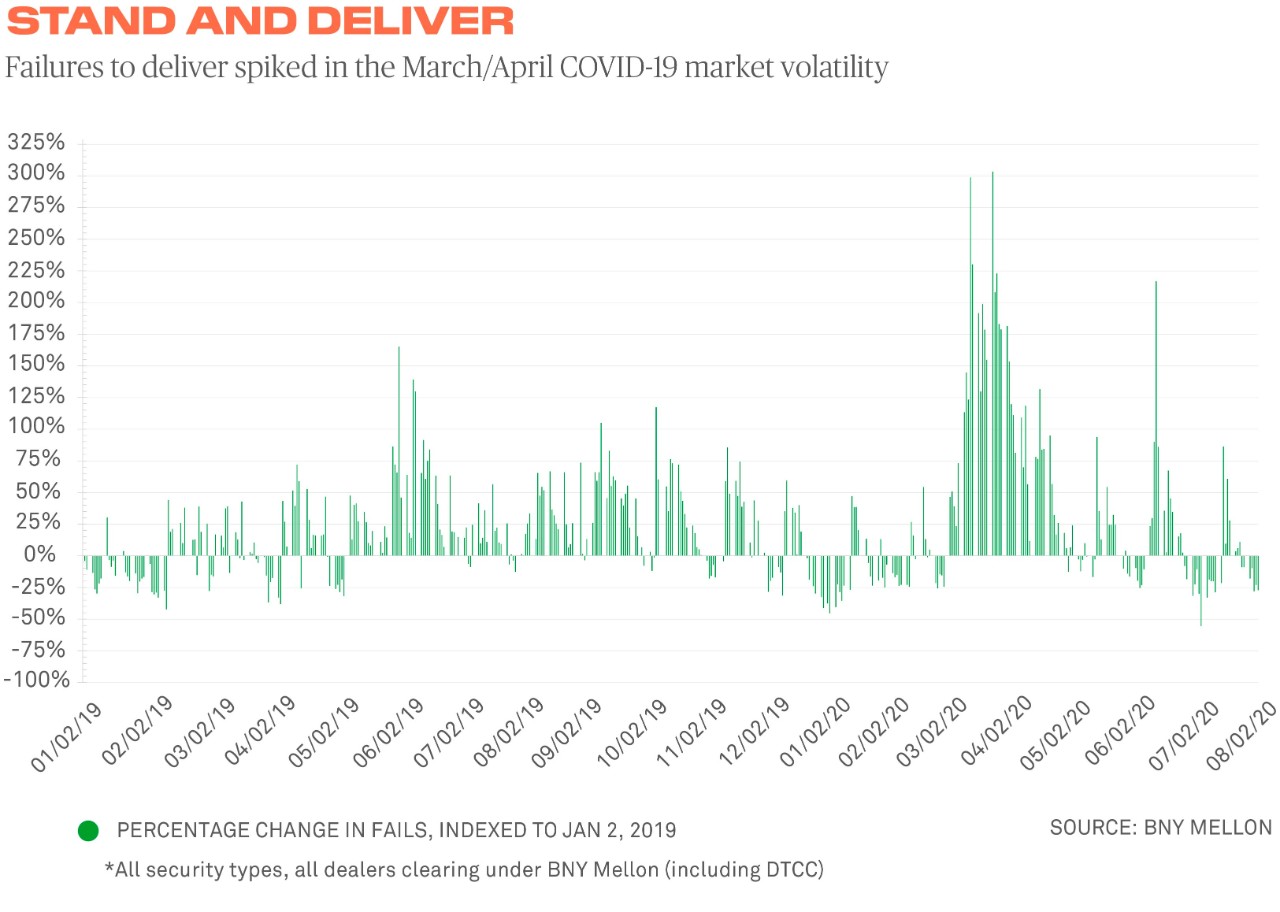 Securities can fail to settle for a number of reasons. It could be a type of security with a particularly high velocity of transactions, or something about the daisy chain effect in the relationship of one bond to another, or even a pattern in the marketplace that affects similar companies around critical periods.

Additionally, platforms and systems can go down and firms can have sudden operational hiccups, like the failure of someone upstream to deliver a security that has already been pledged to another party downstream. Sometimes a firm will request that a delivery be held until other related trades are resolved. Other times, the price of a bond changes so much intraday that firms find there are economic benefits of failing to settle intentionally.

Often, settlement instructions submitted between 2am and 7am New York time have a proportionally higher failure rate because the trade instructions are submitted with less visibility into the day’s market conditions. 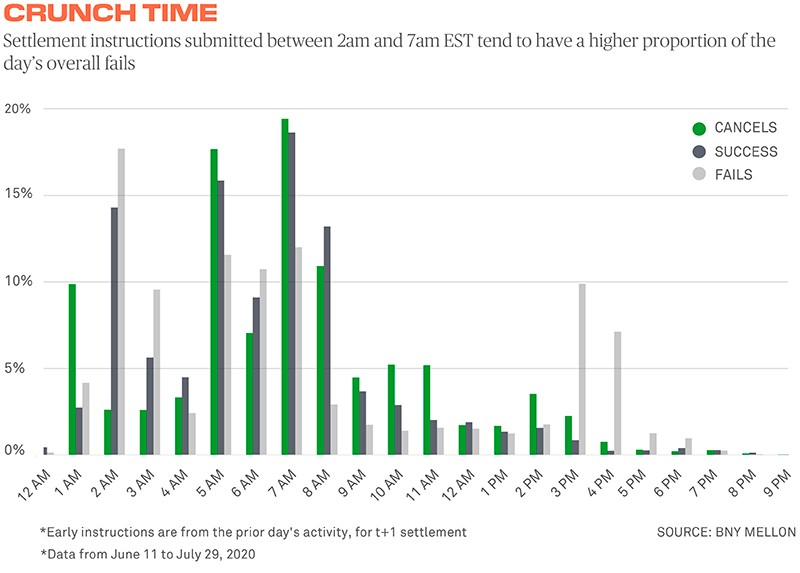 Newly issued securities also have a higher likelihood of failing because  there are greater volumes of transactions occurring in those securities. There are also more fails around the end of the month or quarter when firms are clearing up their books, some participants say.

Once the fail occurs, both sides of the transaction have to record what happened. The party responsible holds the security overnight as an asset it does not own and on which it cannot collect interest, making the balance-sheet usage of that firm potentially less efficient.

Recently, however, experts across the industry have been looking to reduce or minimize the problem of failures using advances in data analytics and machine learning.

A fix using such techniques could save firms penalties of 3% (300 basis points) per transaction on an annualized basis, minus a 0% reference rate, which is equivalent to about $4,166 per day for a $50 million position. That amount may sound small, but considering the high turnover in the bond market, it quickly adds up.

The penalty charges were recommended in May 2009 by the Treasury Market Practices Group, and endorsed by the Federal Reserve, after fails peaked at almost $16 trillion in October 2008 at the height of the global financial crisis. Since then, the prevailing rate of settlement fails has declined considerably and the drain on operational resources has eased, according to the Fed, although there have been spikes in stressed periods, including March and April 2020.

Reducing the incidence of settlement fails is critical for global markets’ resiliency over the long term. The $20 trillion U.S. Treasury market is the largest and most liquid bond market in the world, used as a barometer for asset quality and a basis for pricing and hedging other assets.

“Mitigating securities fails is an important part of reducing risk and maintaining the integrity and liquidity of the U.S government and agency securities markets,” says Brian Ruane, chief executive of the Clearance and Collateral Management business at BNY Mellon.

In one promising method, BNY Mellon has invented a patent-pending solution harnessing recent developments in machine learning to help address these fails ahead of time, in the hope they can be avoided. BNY Mellon, which processes U.S. Treasury settlements for primary dealers and is a leading clearing provider processing more than $8.6 trillion in Fed-eligible securities daily, has spent a year developing a predictive analytics tool to do just that.

The service looks to forecast settlement failures by 1:30pm daily New York time, using intraday metrics and other signals in the data that are early indicators of liquidity issues in specific sets of bonds.

The service also takes into account elements like the velocity of trading in a given security across different time horizons, the volume of bonds circulating, a bond’s scarcity, the number of trades settled every hour and any operational issues, like higher-than-normal cancellation rates.

The resulting predictions can help BNY Mellon’s clients, including bond dealers, to monitor their intraday positions much more closely, manage down their liquidity buffers for more effective regulatory capital treatment, and offset their risks of failed settlements.

“A failure-prone marketplace loses the trust of market participants, drives people toward other, more liquid and more stable securities, and costs everyone a lot of money.”

“If you can predict fails, you can make decisions about how to avoid unexpected cash shortfalls earlier in the day, as opposed to sourcing late-day cash that might be more expensive, or, alternatively, invest cash if you expect to have an excess at the end of the day,” says Victor O’Laughlen, digital business leader in BNY Mellon’s Clearance and Collateral Management division.

Two recent market jolts have underscored the need for a service that can help firms manage around potential fails. The first occurred in the disruption that hit repo markets in September 2019 (see related article, “A Repo Market Dislocation”), when the daily incidence of Treasury fails spiked twice above $100 billion, according to Depository Trust & Clearing Corp. data, more than double the average in late 2019. The second was when COVID-19 shook markets in the spring (see related article, “A Selloff Contagion, Explained”).

In the middle of the COVID-19 market crisis, demand for cash and cash-like instruments such as Treasuries was drastically higher than normal, compounding the issue of settlement fails. Liquidity issues in the Treasury market prompted the Fed to step in and buy more of the securities to restore calm.

“In the work-from-home transition, markets mobilized very quickly, but with the significant increase in trading volumes and auction settlements, the market saw an increase in fails,” says Casey Spezzano, head of flow collateral trading for futures and FX prime brokerage at NatWest Markets. “Sheer volume, coupled with common operational issues like incorrect delivery instructions, took longer to get fixed as the market adjusted to the new operating environment.” 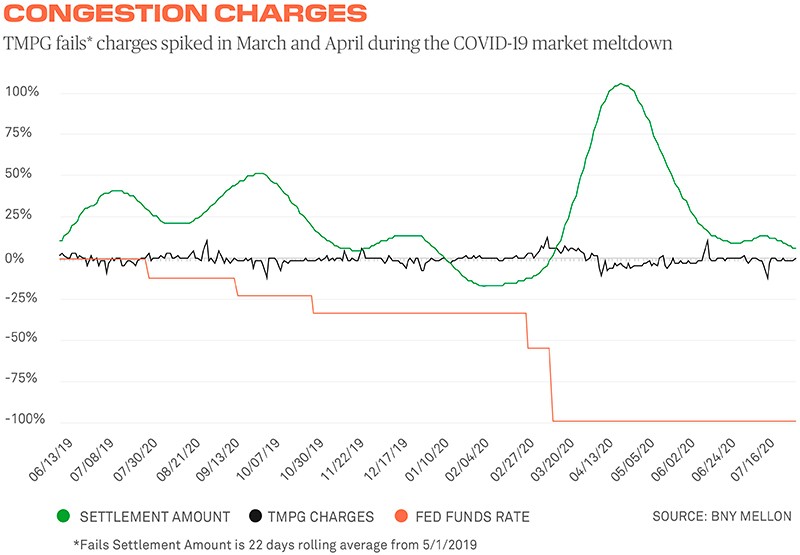 The BNY Mellon predictions service runs daily in three waves: at 1pm for output at 1:30pm, 1:30pm for output at 2pm, and 2pm for 2:30pm. Any pending instructions still incomplete when the Fed closes the market at 3pm on a weekday are considered to have failed.

So far, the tool has predicted about 40% of settlement fails in Fed-eligible securities in a given day. The model is not yet able to accurately predict fails in the rest of the transactions BNY Mellon observes, but the bank is working with its clients to further improve the model.

On top of reducing the potential TMPG penalty charges for firms, reducing fails could also help dealers to better manage their funding sources and not have to scramble for alternatives, keeping securities moving efficiently through Wall Street’s plumbing and unlocking liquidity in assets that are currently held up in a chain.

Currently, if a dealer goes out to borrow a replacement security expecting a fail and it turned out the firm didn’t need to, it would have covered a position unnecessarily. “BNY Mellon has a unique perspective where they have transparency across the market and can see where the bottlenecks are,” says Spezzano. “So if there is a way to tell me at 1pm there is a percentage chance of something failing, we would think about things differently.”

“If by 2pm I can see that likelihood has gone down, the desk would take a more focused approach on what issues we look to over-cover, as we would have greater insight into what would still be failing at 3pm,” she adds.

Industry firms are also discussing how to reduce fails by borrowing ahead of such episodes, including from agency securities lending desks. But there are risks associated with overconfidence in the technology and forecasting metrics can be misleading.

In the BNY Mellon service, 75% of the historical data was used to create the predictions model and the remaining 25% was used to test its accuracy. The system constantly checks elements like its own precision rate (when it cried wolf, was there really a wolf?) or the so-called recall rate, showing the ratio of events forecasted that actually occurred (did it cry every time there was a wolf?).

The model constantly seeks to improve its accuracy rates, looking at factors like shifts in monetary policy, costs of funding, Treasury debt issuance, seasonality in the markets, and intraday transactional flow patterns at a client level, to help it understand which counterparty is more likely to fail based on its operational history and its holdings. 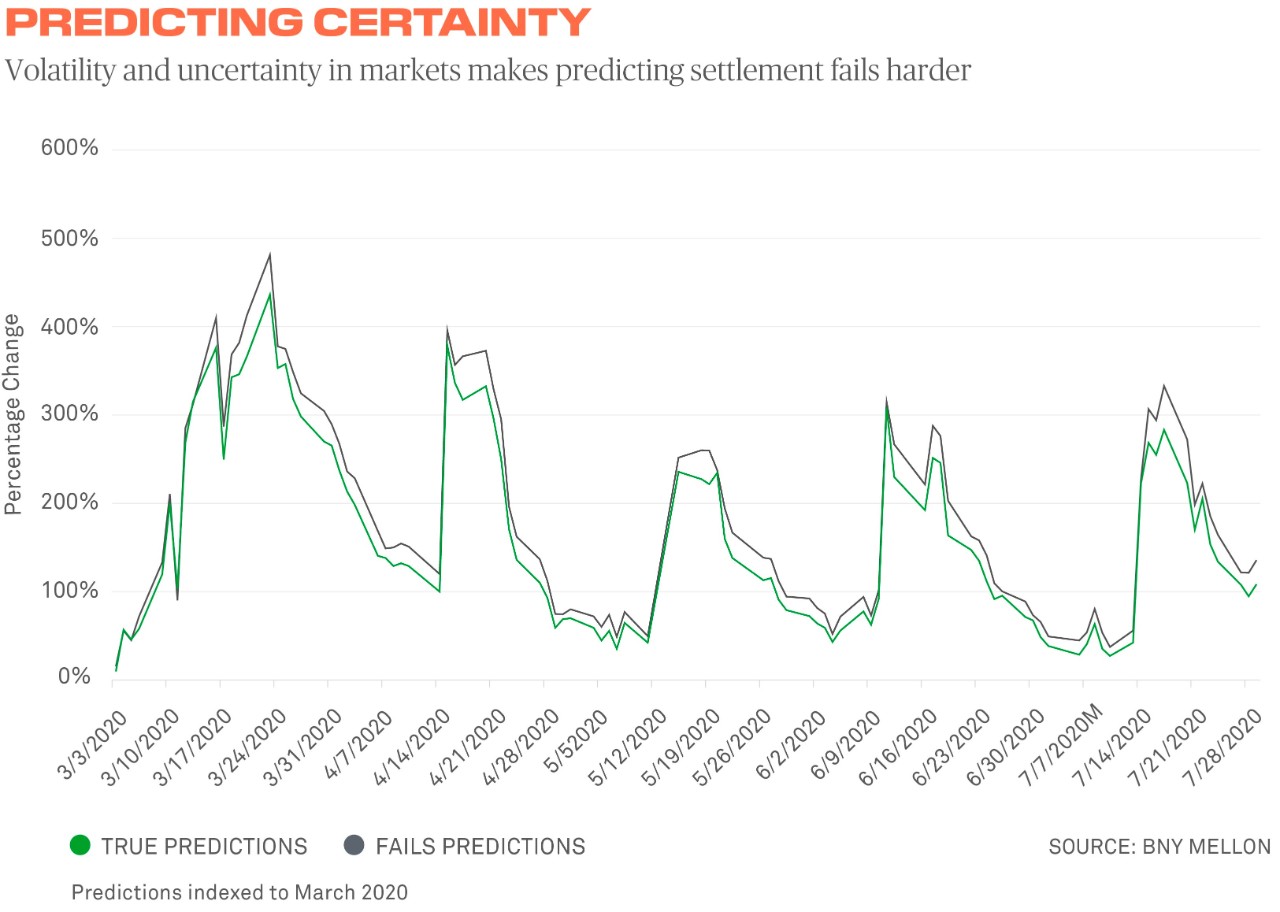 The results of the experiment could be used to inform myriad other applications of prediction tools in financial services and beyond. In the automotive industry, prediction services can be used to track the likelihood of a crash from a certain steering angle, gear positioning, or acceleration rate, for example. In medicine, machine learning has already been used to teach computers to detect tumors using patterns in spots and shapes on chest X-rays. Separately, the technology was able to correctly identify patients who had certain diabetes-related eye conditions, according to the U.S. Food and Drug Administration.

“Data science and machine learning infrastructure have matured to the point where we can apply them at scale to some of these problems,” says Dr. Naren Ramakrishnen, professor of computer science at Virginia Tech. “Algorithms are learning how to represent something in order to reason about it, recognize it and classify it.”

Predictions are just the beginning, however. The hope is that by the end of the year, with the BNY Mellon prediction service for settlement fails in broader use, more fails could be mitigated across the financial services industry with the help of new adjunct services and better coordination with securities lending desks.

Write to George Maganas in BNY Mellon Markets or reach out to your usual relationship manager.