Election Countdown: How COVID-19 is Shaping the Presidential Race

Election Countdown: How COVID-19 is Shaping the Presidential Race

As COVID-19 continues to pummel the U.S. economy and hurt President Trump’s chances of reelection, we assess the material policy implications of a Biden win and how markets might weigh his potential as a moderate.

The 2020 U.S. presidential election is now less than 100 days away. Will voters choose to keep Republican President Donald Trump in office for another four years, or will they elect former Democratic Vice President Joe Biden?


The polls are currently pointing to a Biden win, but we have learned by now to take pre-election polls with more than a grain of salt. Even if Biden wins, control of the Senate, which is currently closely balanced and which already features hotly contested battles on almost every issue, will be important. If the Democrats control the White House, and both the House of Representatives and the Senate, Biden’s ability to deliver on key policy objectives might be easier to accomplish.


But a divided government, with majorities held by different parties in the House and Senate, could complicate either Trump or Biden’s agenda. Fiscal policy, health care policy, national economic strategy and international economic relations will be very different depending on the administration in power.


There are stark differences in the candidates’ governing philosophy and ideology. A Biden win would likely represent a more government-centered, redistributive vision of government, whereas the Trump policy agenda has been much more laissez-faire for corporate America and would likely continue to be so. 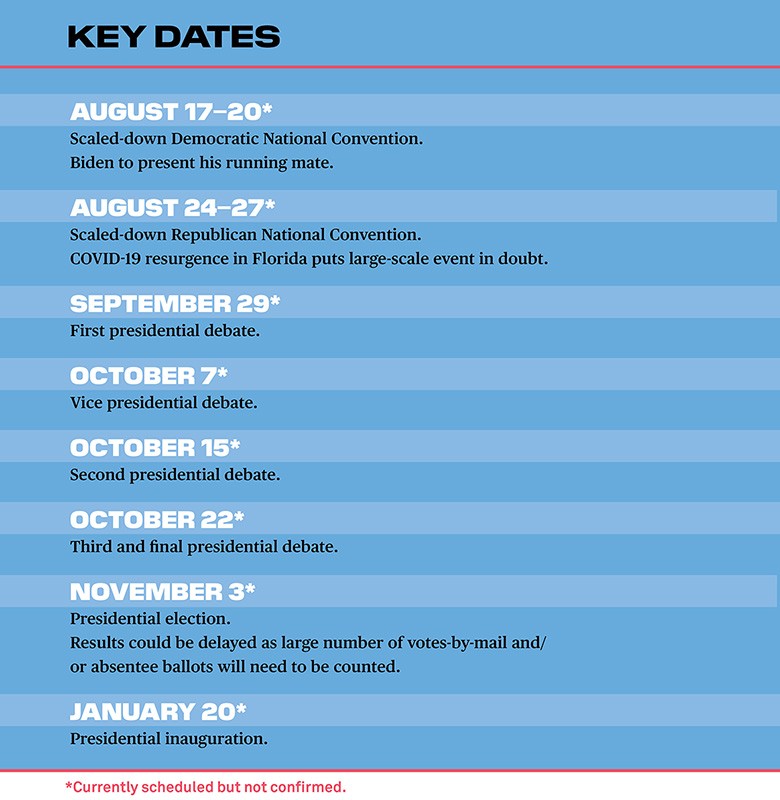 Going to the Polls

It is difficult to understate the consequential nature of the 2020 presidential election, just three months away. The eventful nature of the first Trump Administration, as well as the historic COVID-19 crisis in the U.S. and globally, set against the backdrop of social unrest and deep political division, will make economic and market consequences of the outcome profound.

It will be anything but business as usual after January 20, 2021. At stake is not just the presidency, but the prospect of two branches of government fully in the hands of one political party, a state of affairs seen only five times in the last 40 years.

Incumbent presidents typically have an advantage when running for reelection. Indeed, since 1900 only four sitting presidents ran for, but did not retain, the White House. In every case in which an incumbent lost reelection, he was running during — or immediately on the heels of — a downturn in the economy. The two most recent examples were Jimmy Carter and George H.W. Bush in 1980 and 1992, respectively.

In President Bush’s case, although the official recession ended in early 1991, according to the National Bureau of Economic Research’s dating of business cycles, the unemployment rate didn’t peak until just before the election in June 1992. An even more glaring example of an incumbent losing in the context of a poor economy was in 1932, with President Roosevelt’s defeat of Herbert Hoover during the early years of the Great Depression. Given the current struggles in the economy, these historical precedents don’t bode well for President Trump’s chances.

A key question for this election, then, is whether or not the Democrats gain control of both houses of Congress and the White House.

While it’s still nearly three months to the election, polls indicate that the president is facing a difficult task. Historically, the incumbent’s approval rating is a good barometer of his share of the general election vote. According to the mid-July assessment from Real Clear Politics, Trump is carrying an average approval rating across pollsters of about 41%, down from around 47% just four months ago (see Talking Head chart). While not the lowest of his presidency, that is close to the bottom of the range within which it has moved since mid-2018. To be sure, the national popular vote doesn’t determine the winner of the election, the Electoral College does. But even in states that are key in the Electoral College, former Vice President Biden is polling strongly, and carries the polling lead going into the final three months of the race.


We acknowledge that polls in the past have been inaccurate and surprises — from the Brexit vote in the U.K. to the 2016 presidential election — have recently occurred in important national votes. On the other hand, we note that the final popular vote polling in 2016 was largely accurate, having mostly foreseen Hilary Clinton’s narrow advantage in the actual vote.


In the states — particularly those “swing states” like Wisconsin, Pennsylvania and Michigan that ultimately determine the victor in the Electoral College — the polling gaps were much narrower on the eve of the 2016 vote and the results were generally within the margin of error. It would be an upset of historic proportions — much more so than even in 2016 — if the current polls are so far off this election. 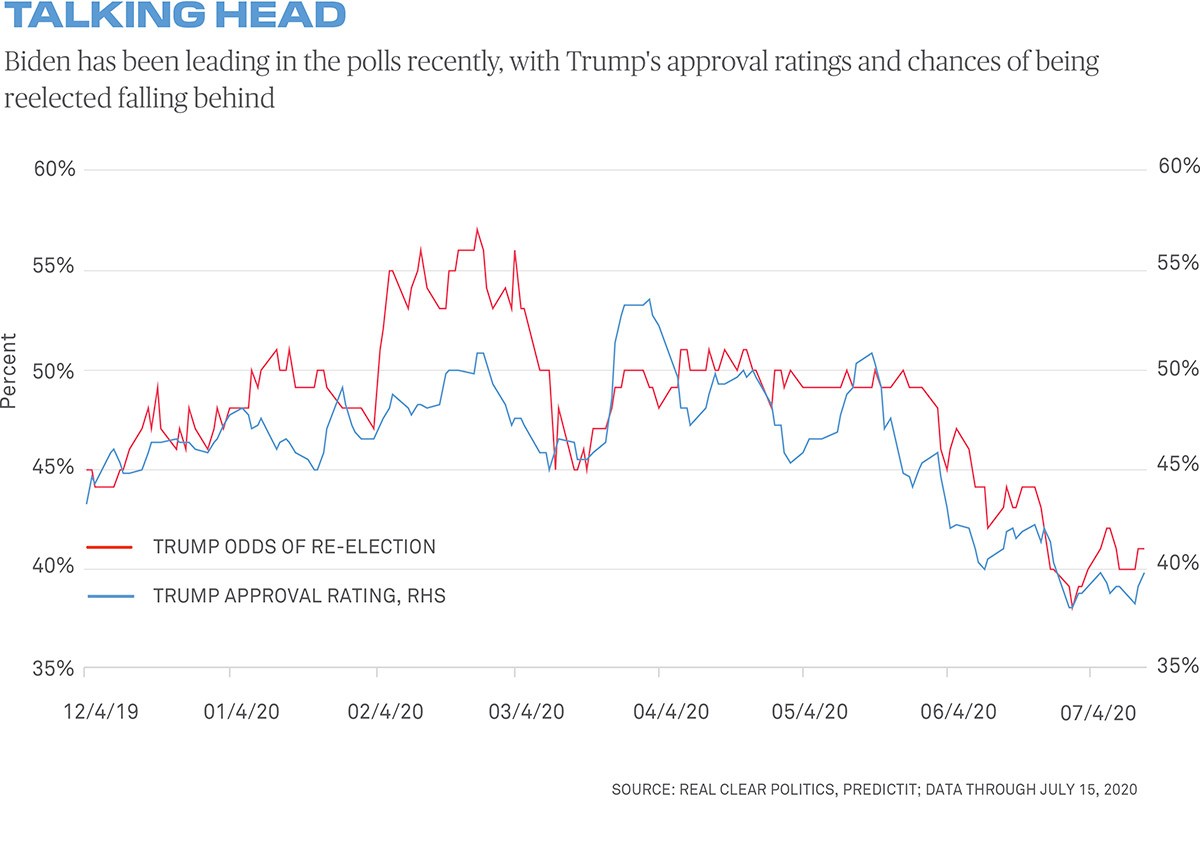 Top of the Agenda

The presidency isn’t the only office at risk of changing parties. Democrats already have the majority in the House of Representatives, but the Senate is still in Republican hands. With a net gain of three seats in November, and more Republican seats in play, the race for control of the Senate is almost as consequential as the presidential election itself. It’s not been unusual in recent decades to have divided government, and folk wisdom is that markets tend to perform better in such circumstances because with opposing parties occupying the executive and the legislature, radical changes in policy are less likely.

A key question for this election, then, is whether or not the Democrats gain control of both houses of Congress and the White House, raising the prospect of significant changes in policy, potentially in a market-unfriendly direction. The Democrats are highly likely to retain the House of Representatives comfortably, if one is to believe current polls. Should Biden win, as the current polls suggest, there is speculation as to whether or not he chooses to “go big” and hard to the left on major economic polices — especially if the Democrats retain the House and gain the Senate.

But the pandemic-related shock to the U.S. economy is historically and economically unprecedented. Under either a Biden administration or a second Trump term, the effects of and eventual recovery from COVID-19 will be a multi-year process, as we have written recently. Policies that prioritize job creation and business formation, while cushioning the deep declines in household income and aggregate consumer demand, will likely be the order of the day. This major reallocation shock will therefore both constrain as well as influence post-COVID-19 policies.

Nevertheless, there are obviously clear differences on economic policy between the two parties. Below we enumerate and comment on some of the main issues.

Regardless of who wins, the next administration will likely need to rely more on traditional Washington institutions as the country recovers.

As we stated at the outset, the landscape post-COVID-19, as uncertain as it appears to be, will color policy requirements and the choices of future administrations.

In principle, a more government -centered, redistributive, traditional leftish response would likely characterize a Biden presidency. So far it appears his campaign has appealed mainly to his base but may shift to broaden his appeal before November.

Beyond 2020, a Biden presidency should be less susceptible to demands and pressure from the left wing of the Democratic Party; in other words, our working assumption is that we don’t expect a Democratic-led presidency to deliver a progressive agenda at all costs. Instead we foresee a more center-left stance, one that would remain heavily reliant on government institutions’ advice. 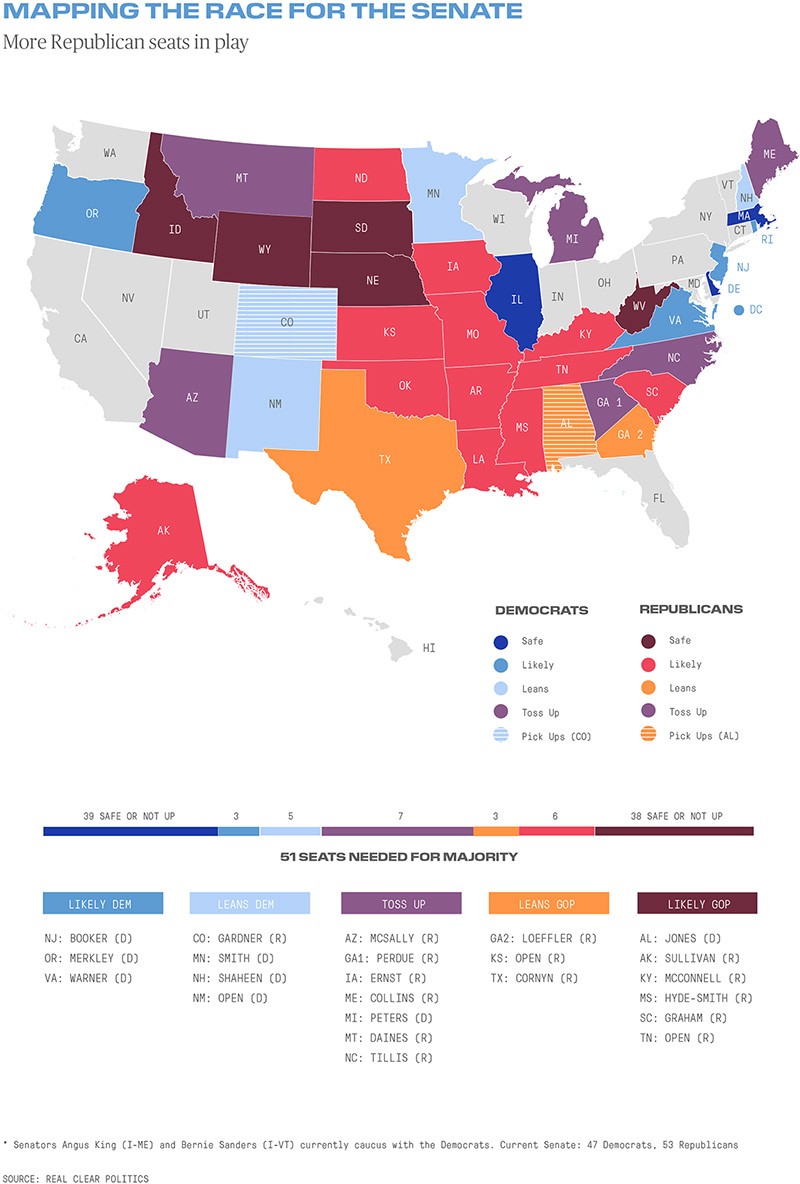 On the other hand, the Trump presidency in the first term has been much more laissez-faire when it comes to business and the economy (if not the Federal Reserve), and focused on industry support and market flexibility – at least domestically.

It appears that post-COVID-19, institutions will be re-designed but not reinvented, managed and utilized according to very different political and societal perspectives. Regardless of who wins, the next administration will likely need to rely more on traditional Washington institutions as the country recovers.

John Velis is an FX and macro strategist at BNY Mellon Americas.

Write to Daniel Tenengauze, John Velis or reach out to your usual relationship manager.