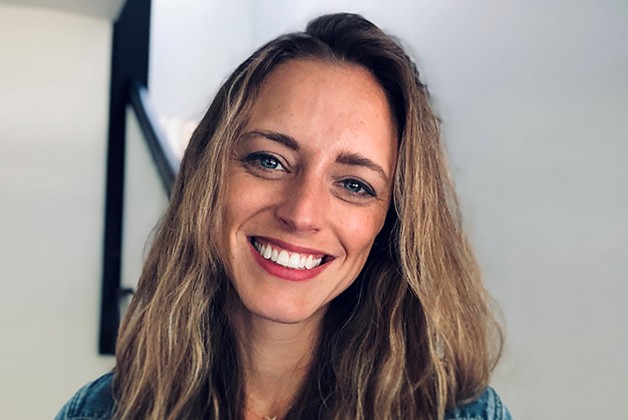 I grew up in rural Missouri, an only child with a single mom. When I wasn’t at school or doing chores, I was riding my horse all over the countryside. I had a lot of independence from a very young age and learned to be self-sufficient. We moved a lot, so I had to get good at making new friends. It wasn't until I was older that I realized how challenging things must have been for my mom or appreciated how we all watch our own parents grow up without even realizing it.

I always did well in school. My mom made sure of that. When I would get in trouble, which wasn’t often, she would make me write reports. It’s probably how I became so good at writing. At my high school career fair, an Air Force recruiter suggested I apply to the Air Force Academy—unusual for a recruiter with an enlistment quota. I didn’t know what the Academy was, but the Air Force seemed like a great way to see the world and secure a guaranteed job. When I learned how challenging it was to get into—let alone graduate from—I felt honored that someone thought I had what it takes to succeed there.

I was accepted to the Academy and, upon graduation, received my commission as a second lieutenant. My job designation was “Communication and Information Officer” which, in civilian terms, roughly translates to IT Project Manager. That's really where I began building a strong professional foundation for my career. I was immediately put in charge of 10 airmen and a help desk supporting a critical command center. It was a huge responsibility for someone just 22 years old.

About two years into my service, a friend and Academy classmate died in Afghanistan. She was the first female graduate from the Academy to be killed in the war. That was a difficult time and a turning point for me. It made me think differently about our mission there. I decided I would leave the service when my five-year commitment was up.

By the time I separated, I felt well-prepared to make the transition into civilian life. I received advice and coaching from other veterans, landed a job as a consultant in Washington, D.C. and distanced myself from military culture as much as one can in a government town. I earned my MBA in finance and moved to New York. I actually found the transition from D.C. to New York more difficult than my transition from military to civilian life. There was some familiarity in the D.C. culture, but in New York, I had to quickly adjust to something completely new. On top of that, I didn't really know what my skills and experiences were worth at the time.

When someone from BNY Mellon reached out to me in 2017 and I saw the caliber of people working here, along with the many pathways for development and growth, I found it to be a tremendous opportunity. At BNY Mellon, I believe people see me for the value I bring to the firm because of my expertise and my unique perspective as a woman and a veteran. And that's so important, because all veterans are unique, with different backgrounds, reasons for serving (and leaving) and feelings about their service.

That's one thing I value about working at BNY Mellon. Although it’s a large, complex organization, we value the individual while celebrating our diversity. There are endless opportunities to learn and grow personally and professionally. I've been here almost four years and I'm still learning new things every single day. Even when I have it figured out, it's evolving – but that's what it takes to keep up in today’s world: we all have to keep evolving.

I got involved in VETNET about a year after joining the firm. I saw an opportunity to use and grow my leadership abilities and demonstrate some of the skills I wouldn't necessarily get to apply in my day-to-day role. I also wanted to help highlight the unique skills, experiences and perspectives military service brings to the workplace and help everyone better relate to their veteran colleagues. It's a really nice thing that people appreciate what we signed up for in the military and the challenges that come along with that – but, if you want to support veterans, create an inclusive culture where they can have promising careers, you have to make an effort to understand and appreciate the culture they come from and how it has shaped who they are.

Having that perspective as you think about Veterans Day can help you do something more meaningful than thanking veterans for their service. If you want to help veterans, make an effort to understand the conflicts they’re being asked to engage in on your behalf and the care they receive in and out of the service. Then, make sure your elected officials know how you feel about it. If you want to make a veteran feel seen and valued as an individual, ask what branch they served in, what their job was or how their service factors into how they define themselves now. Show you’re interested.