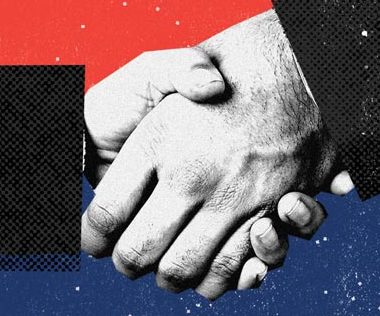 Korea is producing a variety of new opportunities for investment and financing. Corporations and conglomerates there are looking to turn more domestic securities into cash and mobilize more local government debt as collateral.

Roughly 15 years after establishing an offshore securities lending market, large institutions across the country—from insurers to sovereign wealth funds—want to lend even more of their local securities to maximize returns. 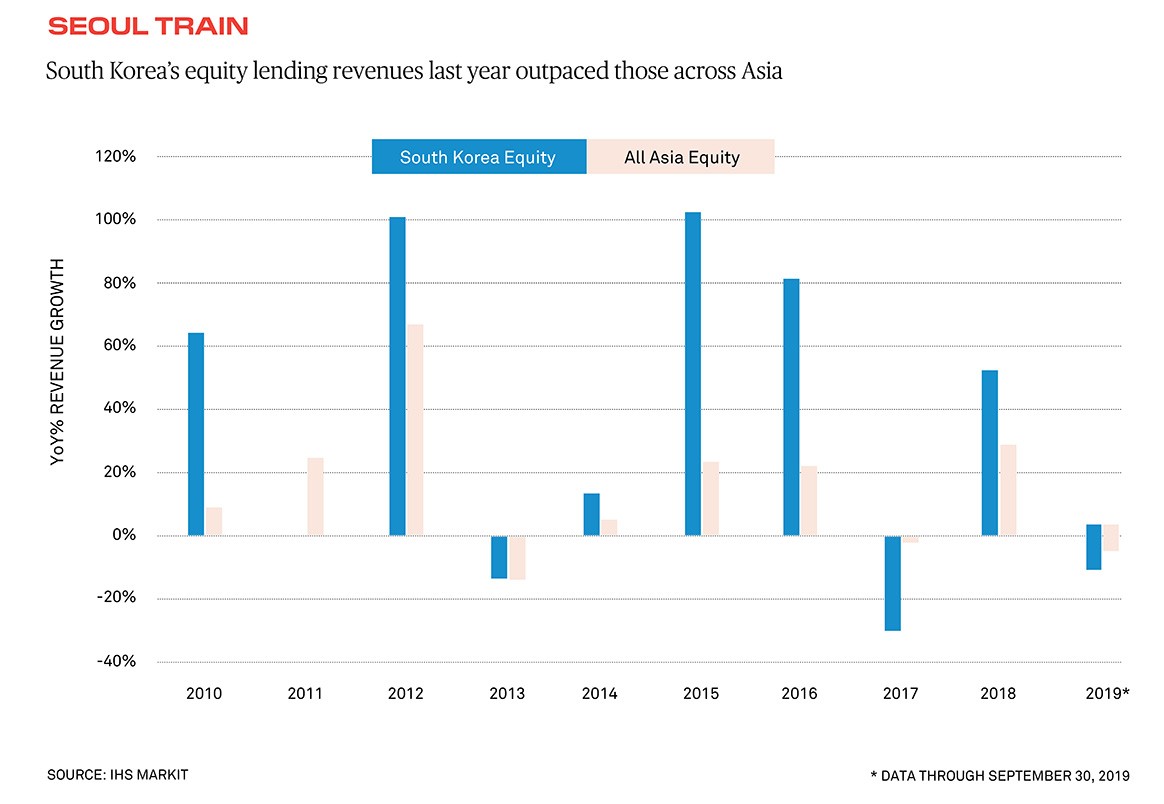 Korean financial institutions are also adopting a more proactive approach to diversifying their holdings through overseas investment, after having domestically concentrated portfolios for many years.

Korea is already the fourth biggest lending market in the Asia-Pacific region by volume, behind Japan, Hong Kong and Australia. So far this year, the amount of Korean equities available to lend averaged $120 billion and around $13.2 billion were out on loan, according to IHS Markit. That compares with Japan, which had $800 billion available to lend and $116 billion out on loan.

“I do think you will see more local asset managers see the benefit of securities lending; we have seen that across the platform, regionally and globally.”

The return of volatility is also good news for Korean firms that deal in “specials,” the hard-to-locate stocks that generally command a premium from borrowers. Fees to borrow Korean equities this year through September 30 have averaged 310 basis points, below the 341 basis points of last year but roughly eight times more than in Australia and five times more than in Japan, according to DataLend.

“I do think you will see more local asset managers see the benefit of securities lending; we have seen that across the platform, regionally and globally,” says Paul Solway, head of securities finance for Asia at BNY Mellon in Hong Kong.

The equity delivering the greatest securities lending revenue last year in Korea was biopharmaceutical company Celltrion Inc., according to DataLend. It became a target for traders when Ion Investments sold some of its ownership stake. DataLend figures show it was also the second-highest revenue generator in the global securities lending markets last year. 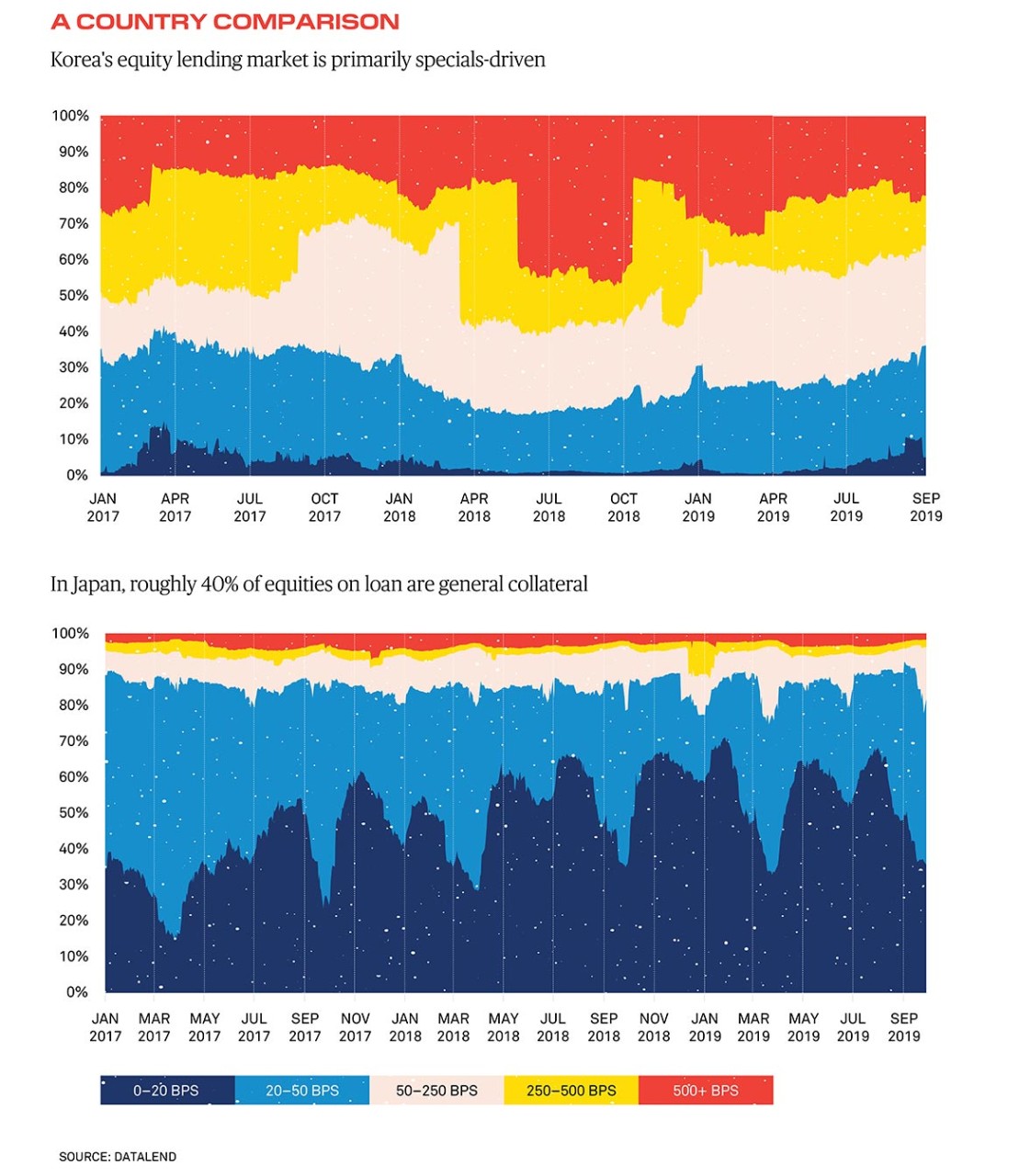 While Japan accounted for the lion’s share of the Asia region’s total 2018 equity lending revenue, South Korea’s was $483 million, a 52% increase on the prior year and nearly double the 28% experienced by the Asia Pacific region as a whole. The country’s equity lending revenues had fallen to $305 million through the end of September.

Its utilization rate—or the percentage of lendable assets on loan—is around 5.4%, down from 7.73% at the end of last year and slightly below Asia’s average of 6.1% as of the end of September, said IHS Markit.

The South Korean economy, which still ranks as an emerging market at index creator MSCI, is expected to grow 2% this year, above the 1.7% real GDP projected for advanced economies, according to an October report from the International Monetary Fund. Its KOSPI 200 stock index is up slightly from a year ago, and domestic players are casting around for fresh opportunities.

In one instance, financial infrastructure providers are laying the pipes for domestic and international asset owners to provide Korean securities as collateral against loans, derivatives and other transactions.

BNY Mellon has been facilitating the use of Korean equities as collateral for a decade—both where receivers take temporary ownership of the assets and in cases where they secure the assets but have no title to them under Korean pledge law. Now the bank is working to pave the way for clients to be able to move Korean government bonds as collateral as well.

Korean government bonds could be a big contributor to growth if they are deemed eligible as “high-quality liquid assets” (HQLA) that financial firms need to hold in order to meet new liquidity regulations enacted in the wake of the global financial crisis. That includes the collateral needed to back complex derivatives.

“It would be premature to judge whether Korean securities could be HQLA or not ... but we are expecting that KTBs can be used as global eligible collateral.”

By September 2020, international regulators will require any entity with more than $50 billion in notional non-cleared over-the-counter derivatives exposure to post collateral by exchanging daily margin, and Korean regulators are making similar demands. An “expected shortage of eligible collateral and necessity of reusing collateral has become a critical issue,” says Jinil Lee, team head of stock lending and borrowing at the securities financing department in the Korea Securities Depository (KSD). “It would be premature to judge whether Korean securities could be HQLA or not” under the rules, he notes, “but we are expecting that KTBs can be used as global eligible collateral.”

Lending in the local fixed-income market also has been growing rapidly, thanks to rising demand for Korean Treasury bonds (KTBs). Currently, Park says, roughly 10% of the overall financing flows in KTBs are for securities lending purposes, while the rest is from local investment banks and a growing group of onshore hedge funds seeking to raise short-term cash by pledging KTBs as collateral. Roughly 3.3% of the available Korean government bonds were loaned out as of September, according to IHS Markit.

Last year, BNY Mellon won a mandate from the National Pension Service of Korea, the world’s third largest pension fund, to become global custodian for its non-domestic fixed-income portfolio. The NPS said last October that it would stop lending its local stock portfolio to other institutional investors.

But one of the inhibitors to growth in Korea historically has been frictions with activities that involve a third-party middleman in the so-called “triparty” market, where collateral changes hands via an intermediary. That meant BNY Mellon—a dominant triparty provider and, according to IHS Markit data* the largest agent lender by global loan balances—couldn’t pledge Korean government bonds or receive them on triparty trades.

Today, all that is changing. With industry input, the KSD has revitalized a 2017 program for fixed-income collateral, including Korean government bonds, to be reused on repurchase agreements or “repos,” stock loans and derivatives. Before the launch of this securities lending and borrowing service known as “Collateral SLB,” there was no ability to reuse Korean collateral because it was pledged into a client’s segregated account and held there. The changes have seen firms including BNY Mellon working with the KSD to build the ability for clients to use and re-use KTBs—not just Korean equities—as collateral in the triparty system.

“A known gap exists in the market and we are trying to solve for it,” says Natalie Wallder, head of BNY Mellon’s Asia collateral program.

Step one involved simplifying the way events of default are handled and reported in Korea. Currently, when a company defaults on its financial obligations, Korean financial regulators must approve the default before the trade can be worked out.

Under the new program, instead of going to the regulator for approval to terminate the trade early, the non-defaulting party can go to the KSD and ask to take control of the collateral. Removing that step of seeking regulatory approval and creating more certainty means that the assets used as collateral in Korean securities lending, including Korean government bonds, are now much more attractive to borrowers and lenders and their brokers.

“A known gap exists in the market and we are trying to solve for it.”

Step two will enable collateral providers and receivers to start using KTBs as collateral in triparty transactions. Those firms sitting on Korean assets without the ability to generate returns by lending them out have run less efficient businesses and racked up extra custody fees, but mobilizing them should present fresh opportunities because Korean securities would be able to move freely in global collateral systems.

There is already demand from securities dealers for KTB collateral, says Park of Jefferies, because more foreign international investors—including fixed-income hedge funds—want to own them.

“Over the past one to two years, the inquiries about using KTBs as collateral have been increasing as international players have much more KTB volume these days,” says Lee at the KSD.