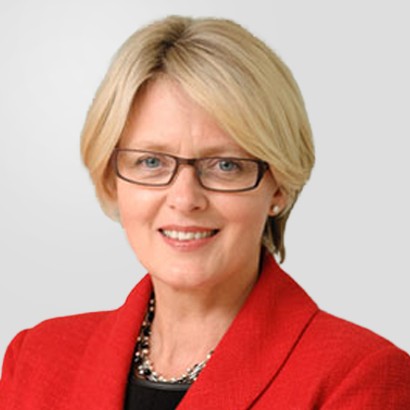 Janet Johnstone is Chief Administrative Officer (CAO) Europe, Middle East and Africa (EMEA). In this role Janet reports to the Chair of the EMEA region, who is also the Head of London Branch and Chairman of the UK Bank.  She is an accomplished banker having gained relevant experience from previous roles in London, Dubai and Johannesburg in business development and relationship management, Risk, Markets and Treasury, and branch banking.

As EMEA CAO, Janet is responsible for certain regulatory functions in the UK but also drives several key activities across the region.  In her UK regulatory capacity, she is a Senior Manager under the Senior Managers and Certification Regime responsible for the operational resilience of two UK entities. In collaboration with senior managers in Operations and Technology, Janet partners with the BNY Mellon Enterprise Resiliency Office to enable local adoption of the global resilience approach, recognising local regulatory requirements and priorities.  The Chief Controls Officer reports to Janet. This function exists to create and maintain consistent First Line frameworks, policies, tools and controls for the UK entities. An important element of this work includes the management and oversight of third party (both inter-affiliate and external vendor) relationships for UK entities. Janet also coordinates the regional effort for conduct and risk culture within the global framework of BNY Mellon, and ensures that the UK regulatory aspects are delivered on behalf of the Head of the London Branch and the UK Bank.

From a regional perspective, Janet works collaboratively across many groups - businesses, locations and entities to achieve efficiencies and cohesion. Desired outcomes are achieved by convening and executing through various groups and forums - Regional heads of business and corporate functions, CEOs of regionally incorporated subsidiaries of BNY Mellon, CAOs and site leaders. Objectives include achieving alignment across businesses, locations and entities, information sharing, learning lessons and providing recognition.

Between 2015 and 2019 Janet was a director of Pershing Limited, Pershing Securities Limited and Pershing Holdings (UK) Limited and between 2017 and 2019 chaired their Boards and Nomination Committees.

Previously, Janet was based in the Dubai Financial Centre, UAE from where BNY Mellon operates a regional management hub for the Middle East and Africa Division. She was a DIFC regulated person and the Senior Executive Officer of the Dubai branch. Prior to this, Janet was responsible for BNY Mellon’s Sub-Sahara African business. Before joining BNY Mellon, Janet held senior positions at Citibank and Absa Bank in South Africa and began her career at Standard Bank of South Africa where she held various positions in branch banking, corporate and international banking.

Janet has a B. Comm. degree from the University of Natal, Durban, and an Associate Diploma from the Institute of Bankers.