Over 230 Years of Looking Forward

We’ve been at the forefront of change in the financial world for over 230 years. We have weathered times of calm and crisis, and we have done it by adapting, refining and consistently improving our services. That spirit of discovery has enabled us to stay ahead of the curve and deliver maximum success for our clients yesterday, today and tomorrow. 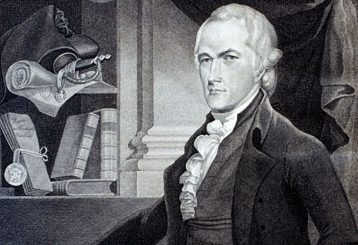 Not only was Alexander Hamilton the country's first Secretary of the Treasury, he also helped establish the U.S. Mint—and his face is still on the $10 bill. His list of titles included military commander, economist, congressman, banker, lawyer and political philosopher. After resigning from Congress, he returned to New York to continue his legal work, and in 1784 founded the Bank of New York.

“People sometimes attribute my success to my genius; all the genius I know anything about is hard work.” BNY Mellon has built a legacy of innovation, including setting ourselves apart as one of the first banks to adopt computing technology, implementing innovation centers and gaining insights from one of the largest datasets in the world. Innovation Is in Our DNA

Deeply embedded in our culture and business capabilities is staying committed to the innovative spirit of our founder, Alexander Hamilton. That remains the driving force behind our legacy of firsts and continues to propel us into the future.

A Legacy of Firsts

Ever since our inception, BNY Mellon has led the way with industry firsts by pushing harder and working smarter on behalf of the industry and our clients. Long before computers, industrial averages, or opening bells, New York City stockbrokers were changing the way the world does business. Twenty-four gathered under a buttonwood tree just steps from what was BNY Mellon's original headquarters to sign a document that would soon lead to the formation of the New York Stock Exchange. After the stock market crash of October 29, 1929, the world financial system was shaken. In the decades to follow, the Great Depression forced global markets to struggle to find solid ground. The Bank of New York didn't just weather the storm, they helped bring peace of mind to clients and showed gains when others could not.

Find out how we power success across the financial world.

Learn more about how we are creating a positive global impact.