2020 and Beyond: Opportunities Untapped 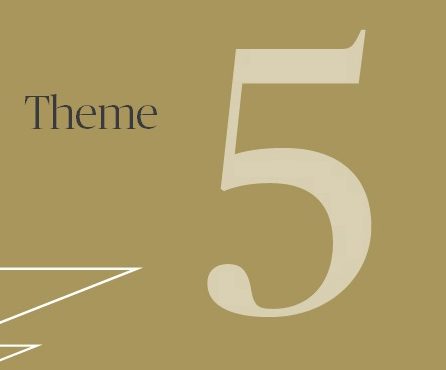 2020 and Beyond: Opportunities Untapped

China’s continuing liberalization of its capital markets is opening the door for buy-side investors in search of alpha. To build a presence in China, a trusted global partner is the key to finding the right path through the next phase of deregulation and to unlocking new investment opportunities.

No investor can afford to ignore the world’s second-largest equities and bonds market as China shifts into the global investment mainstream. The Chinese government has been gradually relaxing its capital market regulatory framework to ease access and promote capital mobility with the aim of increasing foreign participation. In recent years, China appears to have accelerated the pace in which it is pursuing a market liberalization agenda. This is an interesting development, and it remains to be seen how market reforms will play out to capture those impending flows. We see five trends that will emerge over the next five to 10 years. 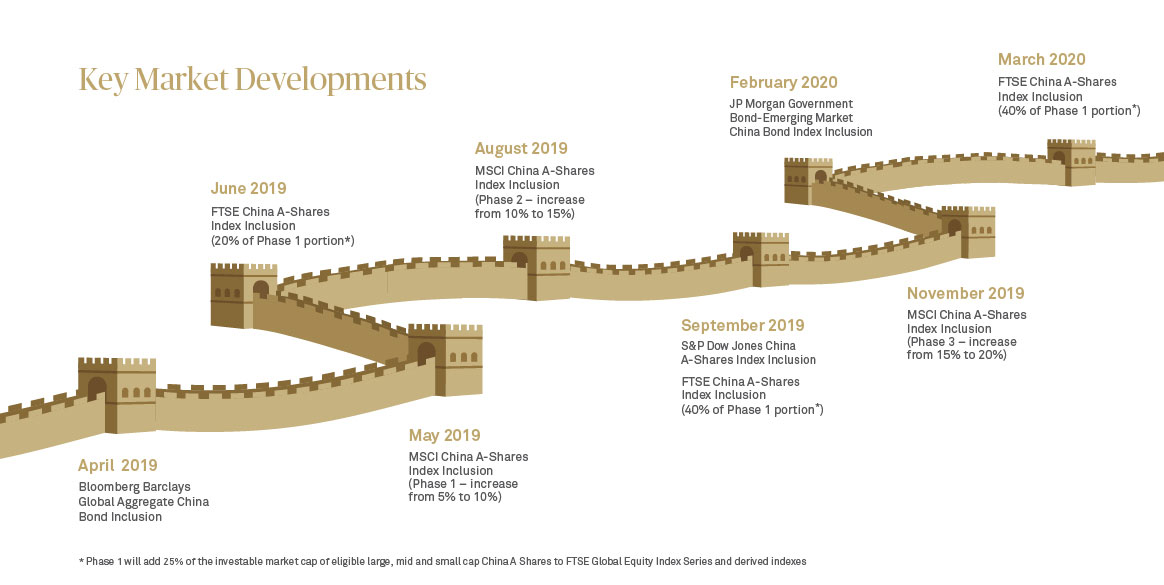 Undoubtedly, the liberalization of China’s financial industry will create a more level playing field for foreign players. The foreign ownership cap will be lifted for asset management companies in April 2020, and for securities companies in December 2020. These moves will be important for China’s integration into the global financial ecosystem.

The inclusion of China equities and bonds in global indices will bring an estimated foreign inflow of up to US$400 billion in the next five to 10 years1. The increased inflows will improve liquidity in the capital markets and boost foreign players’ presence from 3% to 10% for China equities2 and 2% to 15% for China bonds, according to some estimates3. Market reforms such as the introduction of true delivery vs. payment, the expansion of the settlement cycle for China A-Shares, and the alignment of holiday trading arrangements between the onshore market and the Stock Connect program will lead to an increase in foreign participation. 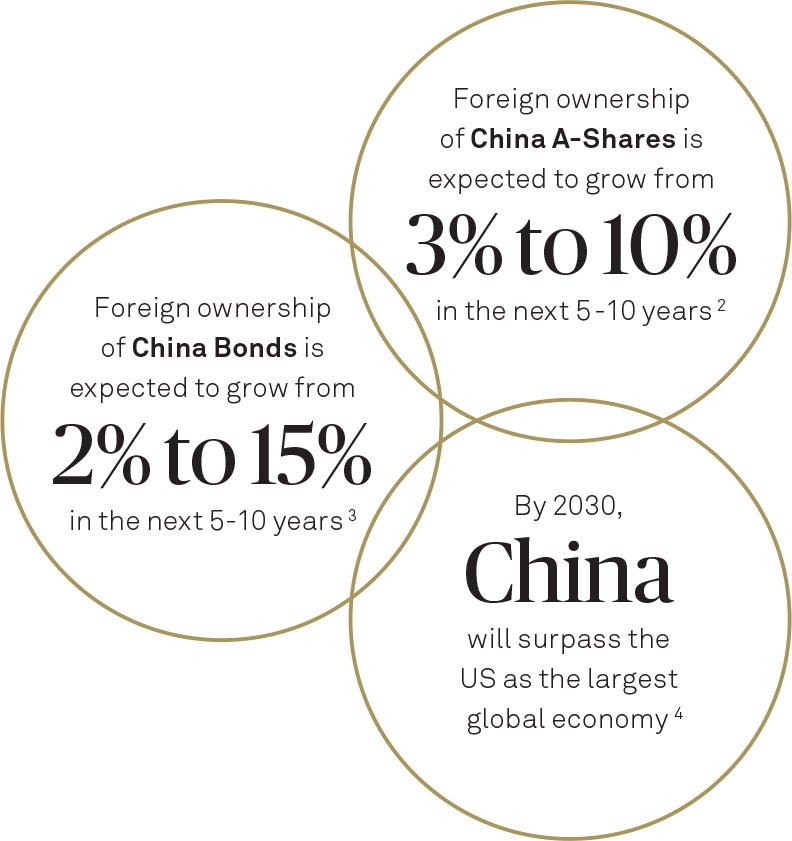 We expect the harmonization of access schemes will continue, alongside the further relaxation of regulations that allow foreign investors to invest in onshore securities.

We expect the current access schemes to co-exist for the next few years, however, we feel there is a likelihood that onshore securities holdings will be fungible across various schemes. Already we are seeing this occurring: China bonds can now be transferred freely between the QFII, RQFII and CIBM direct schemes.

Additionally, we have seen an increased focus from market participants, collaborating to advocate for change to allow China bonds to serve as collateral within global transactions. Although a number of hurdles remain to be surmounted, clear progress has been made and will continue in 2020.

It is clear from all the proposed regulations issued by China in the past year that their road to market reform and opening continues, which may even be accelerated due to the US-China trade war. 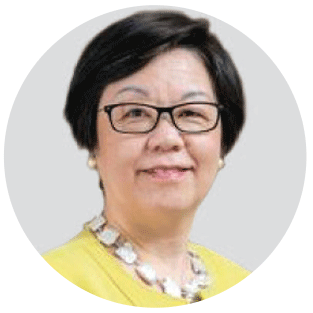 China’s economic performance in recent decades has been exceptional. However, its growing economic clout on the international stage, where it is the world’s largest trading nation⁵, has not been matched by growth in the adoption of the RMB as a global payment currency. According to a SWIFT transactions report, the RMB accounted for a 1.46% share of global payments by value in 2017, putting it in seventh place internationally. Despite significant policy reforms by China’s regulators, this position has not changed dramatically in the past two years. In October 2019, the RMB moved up one notch to sixth position at 1.65%⁶.

As the world’s second-largest economy, the gap between China’s trading power and its currency share of world payments suggests there is huge potential for growth in the use of the RMB. China has been making rapid progress in internationalizing its currency, with trading in the onshore (CNY) market now available in Hong Kong through People’s Bank of China-licensed FX settlement banks. This allows foreign investors to trade CNY without the need to open accounts in Hong Kong and remit the USD equivalent into China. We expect to see greater cross-border transactions and RMB advancements from its role as a trade settlement currency to an investment currency and potentially a reserve currency.

19.    Broadening the Investor Base

With the recent inclusion of China’s securities in global indices, we have seen a greater diversity of investors with differing risk appetites increasing their allocations to China. Some of these include US and European pension funds, hedge funds, sovereign wealth funds and insurance companies. One of the benefits of broadening participation is that it is more likely to promote price discovery and make markets less susceptible to extreme volatility.

Although the opening up of China’s capital markets presents burgeoning opportunities, existing market challenges and new policy reforms being introduced at a rapid pace are making it challenging for investors, especially those new to the market. New inflows will need trusted global partners to help navigate the next phase of China’s deregulation. As global investors access the market, key factors to consider will be the choice of access schemes, FX optionality, ease of repatriation and counterparty risks.

Global investors are calling for regulators to introduce hedging tools as they scale their portfolios in China and seek to manage more complex risks. China’s regulators are heeding these calls and are expanding their investment scope in line with the government’s plan to integrate China’s capital markets with those of the rest of the world. New asset classes that will emerge in 2020 include:

While an expansion of asset classes is welcomed, immediate attention is needed regarding the ease of repatriation and the ability to efficiently trade in these instruments. For instance, clarity on hedging rules and legal agreements between global investors and FX counterparties can be improved. More reforms are necessary before we see growing demand for these new asset classes.

Among key upgrades, many investors would like to be given access to a listed futures market and other derivative products to enhance risk management as they scale their portfolios with higher inclusion ratios. 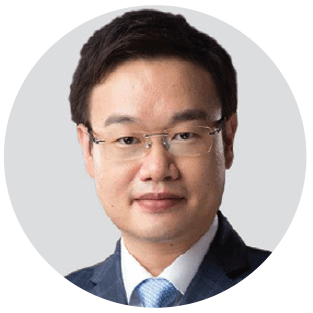 China A-Shares inclusion has important implications for investors, as many are currently under-weight in China equities.

Ultimately, however speedy China’s growth, the main challenge for global investors will continue to be charting the right path into unfamiliar territory. Choosing the right investment services partner to link the global with the local can be the answer to finding an approach that works. 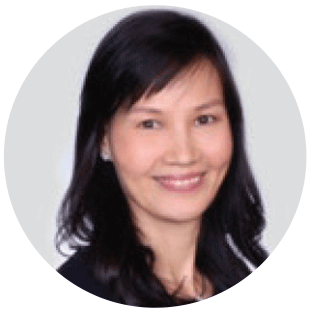